HTC has two smartphones in its portfolio with a dedicated button for Facebook fans. The £370 (inc.
Written by First Take , Previews blog log-in on July 18, 2011

HTC has two smartphones in its portfolio with a dedicated button for Facebook fans. The £370 (inc. VAT) Salsa is one, and the ChaCha the other.

Where the ChaCha is also HTC's first handset to feature a mini-QWERTY keyboard, the Salsa takes a more standard approach. In both cases, though, the Facebook button sits at the bottom of the fascia, where it's highly visible and readily accessible. 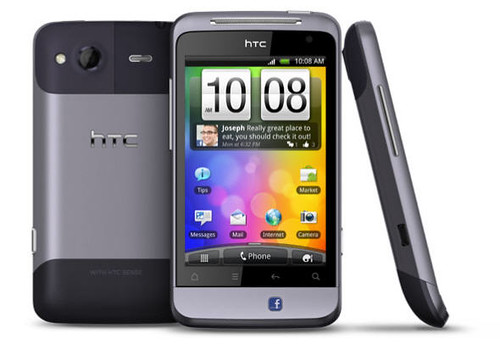 Facebook button aside, the Salsa is a fairly standard Android handset. With a 3.4in. screen offering 320 by 480 pixels, it's not leading edge. It has an 800MHz processor and 512MB of internal storage. The 5-megapxiel camera shoots a decent photo, and there's also a front-facing VGA camera.

It's nice to see Android 2.3 (Gingerbread) here, rather than version 2.2 (Froyo) that's used in so many current smartphones, but less encouraging that Flash is not supported — the 800MHz processor simply can't handle it.

A small lip at the bottom of the chassis is reminiscent of HTC's old flagship Hero, and this helps give the Salsa a distinctive look — along with the Facebook button, of course.

The Facebook button has the same roles here as on the ChaCha. If you're using the camera it can be pressed to upload a photo to your Facebook. If you press it at any other time you're into the updates screen, while a long press takes you to Facebook Locations. You can't reassign these functions, and you still have to go into Facebook proper to carry out many operations.

We are undecided about the Salsa. Facebook fans may feel frustrated at the lack of functionality the dedicated button offers, while for non-Facebook users it's clearly a redundant feature. Is this a case of HTC trying to differentiate just that bit too hard?