Huawei might not be that well known as a manufacturer of handsets in Europe. But its phones, broadband dongles and Wi-Fi dongles are rebadged by network operators and there are plenty of them to be found in the wild.
Written by First Take , Previews blog log-in on Oct. 7, 2010

Huawei might not be that well known as a manufacturer of handsets in Europe. But its phones, broadband dongles and Wi-Fi dongles are rebadged by network operators and there are plenty of them to be found in the wild.

The company has just launched the IDEOS, an own branded smartphone and thus something of a rarity. The on-paper specs are alluring and headlined by the presence Android 2.2 and an anticipated launch price of £99 to £129.

Well as we write, Clove is ranging the handset for a rather more hefty £199 inc VAT. While even that price is attractive for a well specified Android handset, and Android 2.2 is certainly enticing, a short play with the IDEOS indicates that there is a fair bit to be desired.

Oh, the basic specs are all here. Wi Fi includes support for 802.11n as well as b and g. There is GPS, Bluetooth and HSDPA. And a capacitive touch screen. For those that like to stand out from the rest, a range of brightly coloured backplates is available. 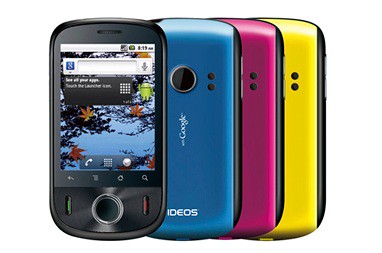 But delve deeper and cracks start to appear. The screen may be capacitive but it does not support pinch to zoom. This is nowhere more frustrating than when web browsing. The 2.8-inch 320 x 240 pixel screen is not ideal for browsing, and having to use the Android on-screen zoom icon or a quick double tap to zoom in and another double tap to zoom out feels clunky.

The small screen is tricky for text entry particularly in tall format. We found we kept on miss-hitting keys, which the capacitive screen recognised with ease, but which weren't actually what we wanted.

And there is no Flash support. One of the highlights of Android 2.2 is Flash support, but it isn't here because the 528MHz Qualcomm processor can't cope with it.

You get other goodies new to Android 2.2 like the ability to use the phone as a portable Wi-Fi hotspot, a slightly more sophisticated Google search tool and improved application management, but these are standard to the operating system and so available on other Android 2.2 handsets.

Android has not been skinned on the IDEOS and so there is also a tweaked for version 2.2 menu launcher which sits on each of the five main screens and gives access to the full apps list, web browser and phone dialler - with call button. Given that, we aren't sure why Huawei has designed physical call and end buttons onto the front chassis, but they are present, along with a similarly redundant navigation button.

All in all, the Huawei IDEOS falls over a little too often for our liking. Competition is becoming fierce in this part of the market, and we aren't sure the IDEOS has enough of what it takes to do well.