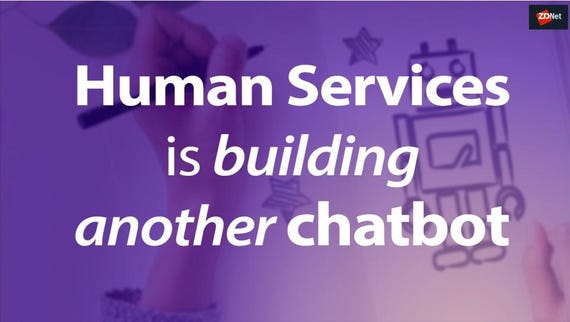 The federal government has decided that all Commonwealth entities would benefit from having a chatbot, with the Department of Human Services (DHS) announcing it was working on the development of one that will be ready by the end of 2019.

The Platform Independent Personal Assistant -- PIPA -- is expected to "significantly improve the customer experience for users of online government services", according to Minister for Human Services and Digital Transformation Michael Keenan.

PIPA is being developed by the department's Augmented Intelligence (AI) Centre of Excellence and its first target is Centrelink.

See also: Australian government to bring all services online by 2025

"One of the first roles being considered for PIPA is on the Centrelink Express Plus mobile app which is already used by millions of Australians," Keenan said. "PIPA will be able to ask customers what they'd like to do and then help them to complete tasks, such as lodging an online claim form, or updating their income, and other data."

PIPA will also attempt to translate documents into other languages, or offer plain English interpretations of correspondence sent to a customer's online mailbox.

"All of these functions will dramatically improve the customer experience for those using our growing number of digital channels, especially those who are new to the online world and need a helping hand to find their way around," Keenan continued.

PIPA joins several other digital assistants that are already employed by the department, with Keenan noting the customer-facing ones have helped answer more than 2.3 million questions.

Speaking at the Technology in Government conference at Canberra during August last year, DHS CIO Charles McHardie said he believed the future of routine citizen service delivery is interaction via virtual assistants, mostly on smartphones.

He said he anticipated that DHS will become a "very virtual assistant-heavy department", with the "app" disappearing, and citizens will instead interact directly with the artificial intelligence bot.

"We think you will talk to our virtual assistant to be able to give us a change in circumstance, to be able to lodge a claim, to find out information about DHS, and you'll be able to do it in your own native tongue," he explained at the time. "From a citizen perspective, we think AI and virtual assistants will allow us to, moving forward, provide a dynamic and very tailored experience for the citizen."

Following a report into the IT problems plaguing the rollout of the National Disability Insurance Scheme, a chatbot has been flagged as a viable solution.

IP Australia's Alex is more than just a chatbot

The patent office is investing heavily into cognitive computing, with its chatbot providing much more to the business than only being a first point of contact for consumers.

After building a business case and working alongside the ATO to develop the platform, the department decided not to go live with its virtual assistant pilot.

Chatbots are dead. A lack of AI killed them. (TechRepublic)

Chatbots were all the rage back in 2017, but in 2018 we're still waiting for them to live up to their hype.