IBM has added five new services to its Watson offering for developers.

Speech-to-text functionality will allow developers to enable spoken input for voice-controlled apps or systems, or transcribing meetings. According to IBM, there's a 10.4 percent word error rate with Watson's speech-to-text, but Big Blue is hoping to cut that as Watson learns from the corrections users make. It's available only in English for now.

Text-to-speech, available in both English and Spanish, has also been brought to Watson. IBM reckons developers could use it for software designed for the visually impaired, or for in-vehicle systems that could give information to drivers on the road. 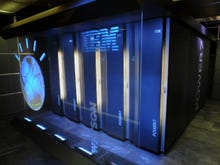 How Eni is enlisting IBM's Watson in the hunt for black gold The Italian energy giant is creating a new business unit to explore how IBM's cognitive computing could help it find new oil reserves and make better business decisions.

Visual recognition will allow developers to upload images and have Watson classify them, by recognising elements of the picture including objects featured, background colour, the type of scene (recognising an image is both a photo and a landscape, for example) and the colours used. The functionality could be put to use in organising big batches of images, IBM says.

Concept insights adds some extra nous to search, finding both implicit and explicit links to user's queries and helping find information linked to the words in the search query, as well as related concepts that's aren't mentioned directly.

Tradeoff analytics, meanwhile, are used to help Watson aid decision making in the face of conflicting priorities. For example, it could help doctors to select the right treatment for a patient based on a number of criteria, or for more straightforward decision it could help a person decide what car or phone to buy. The results are presented as tables or graphs and users can adjust the weight given to each criterion according to their preferences.

The five services are available in beta for free via Bluemix, IBM's cloud app development platform.

With commercialising Watson high on IBM's list of priorities, the company has added new services and partners to the system in recent months. Its Watson-powered Analytics package hit public beta in December, for example, and has been enlisted by the Cleveland Clinic is genomic research.

While IBM has been chiefly targeting the medical industry in its efforts to turn Watson into a money maker, it's also been putting it to work in the kitchen: the cognitive computing system's first cookbook, Cognitive Cooking with Chef Watson, is set to be published soon.

Join Discussion for: IBM bulks out Watson for developers with...