AUGUSTA, GA -- All too often, sports websites buckle under the collective weight of their fans.

When you have a website that likely millions of golf fans around the world will be tuning into, the last thing you want is the website crashing. In an unassuming green building at the Augusta National Golf Club, which hosts the Masters tournament every year, lies what IBM calls its "bunker." That's where the brains of the website's operation is, the web and engineering team that keeps the Masters website ticking over. 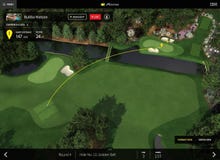 Lasers on the golf course: How IBM is tracking the Masters scores Using internet-connected devices to capture where golf balls are headed, users can now visualize exactly how a golf player tracked the course.

Their job is to keep an eye on IBM's SoftLayer, otherwise known as its predictive cloud, which acts semi-autonomously, and reacts and expands based on real-life events.

Simply put, the website can anticipate when it might get overloaded based on predictions and number-crunching and what's happening in the real world, and add more servers proactively.

"In theory, the website is uncrashable," said John Kent, IBM sponsorship marketing manager, during a tour of the bunker. "The website is designed for continuous operations, so we have to keep an eye on demand."

SoftLayer isn't new, but it's getting bigger and better, IBM says. It already helps power some of the world's biggest multiplayer games. And with more than 66 million daily posts, Tumblr relies entirely on IBM's predictive cloud to keep ticking over.

But what most viewers of the website probably don't realize is that they're also contributing to keeping the site up and running.

The system works like this. The predictive cloud takes in various bits of data to determine how many people are watching. A lot of historical data determines when key events happen -- like later in the tournament, during important moments of game play, more people will be watching. That's fed in, along with real-time social data from Twitter, which determines how many people are talking about a certain topic.

And with its machine learning capability, the data from last year doesn't live in a vacuum. It's used again this year (and in future years) to figure out when high-profile events are coming up and can add extra capacity without prompt.

This kind of forecasting effectively helps bring in resources before they're needed. Too many people visiting, and the website crashes. Predicting what the traffic will be helps enables the team to add servers where necessary, while also saving unneeded servers that could be better used elsewhere.

"Whatever happens on the golf course, we're prepared," said Brian O'Connell, master inventor with cloud services. O'Connell has more than one hundred patents to his name over a ten-year period, and is the brains behind the predictive cloud.

IBM said the beauty of the predictive cloud is that it isn't a one-trick pony.

But it can also be modified to different industries and events. Think back to Black Friday. Remember when that website crashed under the weight of thousands of people trying to score the same discounted prices as you? IBM wants to tackle that with its technology too.

The predictive cloud system will be next used in the French Open later this year, and can be easily adapted to different games. Even at the next Masters tournament, this year's data is saved so the machine can learn from it and the processes can become more refined over time.

Disclosure: IBM provided travel to the Masters. No non-disclosures or agreements were signed.

Join Discussion for: How IBM's predictive cloud makes the Masters'...