Latest IDC forecasts suggest mobile manufacturers will ship more smartphones than feature phones in 2013, the first such occurrence in the global mobile phone market on an annual basis. 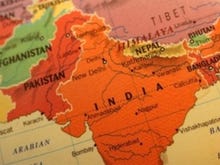 Announced by the research firm this morning, China, Brazil and India will be the two emerging markets to keep an eye on in the coming few months as smartphone shipments to these regions will be comprised of a significant growing percentage.

Described as a "burgeoning" market by the research firm, these high population nations' economies are growing, and so are their respective middle classes.

This puts the U.S. and the U.K., two of the current primary markets for smartphone users, in second and third place, respectively, behind China, which is set to take the smartphone shipments top spot. The two largest countries in the world by population are set to rocket in year-over-year smartphone shipments growth by as much as 459 percent in the Indian market, according to the forecast.

But the shift towards these traditionally subdued and developing nations is becoming increasingly apparent.

With outsourcing and an increase in industrial development in these BRIC nations—a group of developing countries, limited to Brazil, Russia, India and China—these regions are pushing their way through 'emerging' market status into 'developing' status.

China will "easily" remain the world's largest smartphone market, the firm said, as low-cost Android-based handsets will remain at the top of the shipment volumes to the country. Smartphone prices are also expected to fall significantly in the country.

While we don't expect China's smartphone growth to maintain the pace of a runaway train as it has over the last two years, there continue to be big drivers to keep the market growing as it leads the way to ever-lower smartphone prices and the country's transition to 4G networks is only just beginning.

Meanwhile, the research firm sees slower growth in the U.S. for the years ahead as the vast majority of all mobile phone users in the country are now smartphone owners.

For India and Brazil, however, year-over-year growth will more than double as mobile manufacturers continue to contend with the country's vast population and seek additional entry routes into these regions. For India, enabling 3G stability with the hope of rolling out 4G services by 2015, will also drive growth.

As for Brazil, the move into the country by significant up-and-coming players in the smartphone space, such as Lenovo , will be aided tax breaks, helping these companies bring jobs to the local economy. A successful LTE rollout in the country is "key" to the country's smartphone growth, the firm said.

Chau added that the firm expects less than half of all phones shipped in India to be smartphones by 2017, and yet it will only weigh in as the world's third largest market, giving some gravity to the vast size and scale of the Chinese market.