Full Bio
Posted in Between the Lines on October 25, 2013 | Topic: Mobility

The supply chain for mobile devices alone is poised to become more valuable than factories serving the entire consumer electronics market, based on a new report from IHS iSuppli. 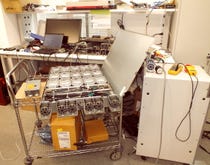 Inside Facebook's lab: A mission to make hardware open source A look behind the scenes of Facebook's hardware lab, the spiritual home of the Open Compute datacentre hardware movement, which may radically change the type of IT enterprises use, and who they buy it from.

According to the market research firm on Friday, revenue from OEM factories worldwide that produced "media and PC tablets" and "3G/4G cellphones" (which analysts defined as " a category dominated by smartphones) will ring up to $354.3 billion by the end of 2013.

But factories for consumer tech at large is only expected to deliver $344.4 billion in revenue this year. If that happens, it would mark the first time ever that global factory revenue for mobile devices alone surpass the rest of the spectrum.

Randy Lawson, a senior principal analyst covering semiconductors at IHS, hinted in the report that these findings shouldn't be all that surprising by remarking "sales growth for CE products has languished in the doldrums."

Just think about how many gadgets have been combined and then replaced by the smartphone: pocket cameras, handheld audio and video recorders, and MP3 players, just to name a few.

The fact that these two product categories are on their own able to generate more OEM factory revenue than the entire CE market illustrates the overwhelming popularity of smartphones and tablets. Meanwhile, the CE market has gone flat, with many of the major product types experiencing either low growth or declines in revenue during the past six years.

IHS analysts asserted this trend will continue -- albeit the pace of growth might slow down in 2014, with revenue forecasted to increase by only 18 percent to $418.6 billion next year.