M2 is in the box seat to combine its assets with those of iiNet, after the iiNet board determined that the predominantly scrip offer from M2 was superior to the all-cash bid by TPG.

The decision by iiNet's board triggers the matching rights clause in the agreement entered into with TPG when it lodged its offer to acquire iiNet for AU$1.4 billion.

TPG has until Tuesday May 5 at 5pm, Australian Western Standard Time, to respond.

"We have to recognise that evaluating the M2 and TPG proposals requires careful analysis, given TPG is offering cash and M2 is offering shares in a significantly enlarged telecoms company," iiNet chairman Michael Smith said in a statement to the Australian Securities Exchange (ASX). "There is some judgment required on our part; however, we do believe that based on the terms currently in front of us, the M2 proposal warrants triggering the matching right process with TPG.

"Without pre-empting any response from TPG, they have a right to submit a revised proposal in the coming days. Once we know their position, we will provide a recommendation to shareholders as to which proposal we believe they should support." 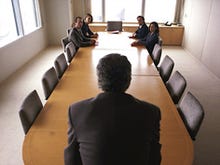 TPG or M2: Which company is iiNet's perfect match?

iiNet now has two potential buyers in M2 and TPG, but what is the difference, and which would be better for iiNet customers?

Under the agreement signed with TPG, the formal recommendation of the iiNet board continues to be TPG's offer.

M2 launched its self-valued AU$2.25 billion bid for iiNet on Monday, which involved swapping 0.803 M2 shares for each iiNet share, plus a AU$0.75 special dividend.

iiNet noted in its statement that measuring the price of M2 shares over various windows resulted in valuations ranging from between AU$10 to AU$9.40 per share.

Should iiNet proceed with the M2 offer, an independent expert would be appointed to consider the "value, timing, and achievability of the synergies" of the bid.

At the same time, TPG announced to the ASX that it had upped its stake in Amcom to around 18.6 percent in an attempt to block Vocus Communications from acquiring the company.

"TPG supports the continued operation of Amcom as a stand-alone business under the stewardship of the current board of directors and management team," TPG told the ASX. "TPG has no intention to make any counterproposal to the current scheme."

At the time of its offer, Vocus owned 10 percent of Amcom, and looked to purchase the remaining 90 percent of shares, with Amcom shareholders receiving 0.4614 Vocus shares for each Amcom share, representing a value of AU$2.45 per Amcom share based on Vocus' closing share price on October 24.

"Vocus and Amcom are highly complementary businesses that make this transaction strategically unique," Vocus chairman David Spence said in December when the offer was made. "This acquisition enhances Vocus' positioning to create a national telecommunications infrastructure provider to service commercial, channel, and wholesale customers."