Jolla, the Finnish company founded by ex-Nokia employees, has filed for debt restructuring in Finland after failing to secure additional finances.

Four years after kicking off its ambitious plan to challenge iOS and Android, and tackle the low-margin hardware business, Jolla on Friday announced it would temporarily lay off a "big part" of its headcount until its finances return to order.

The company said it had postponed its most recent funding round, which it had aimed to close by November to top up the $50m backing it has received to date.

"Unfortunately the development until this point has required quite a lot of time and money. To get out of this death valley, we need to move from a development phase into a growth phase. At the same time we need to adapt our cost levels to the new situation," Jolla chairman and co-founder Antti Saarnio said.

Jolla released its first handset in 2013 and followed it up last year with the crowdfunded Jolla tablet. 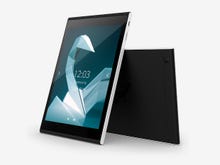 However, since then it's pulled back from devices, announcing over the summer it would split its operations to focus on hardware and its Linux-based Sailfish OS separately.

The odds were stacked against Jolla from the outset. But it captured the attention of some who hoped it could be a viable alternative to iOS, Android and become the torchbearer for MeeGo after Nokia abandoned it in 2011 and shifted to Windows Phone for smartphones.

At this point, the question for many Jolla fans is if and when they'll get their tablet. It was originally meant to be delivered in May and finally began shipping to some backers in September.

However, early last month Jolla apologised for further delays for both Idiegogo contributors and pre-order customers. It planned to complete orders during December but they now hang on the fate of the company's finances.

"We are now first concentrating on getting the overall financing challenge solved, and after that we will do a plan for the Jolla Tablets. Our aim is to find a working solution for this asap," a Jolla spokesman told ZDNet.

As for the separate hardware company, that too has been put on hold until its financial issues are resolved.

Jolla initially pinned its hopes on China for licensing Sailfish OS to hardware makers and internet firms. But more recently it's shifted focus to BRIC nations and South Africa.

In July it announced its first Sailfish OS licensee would be Intex Technologies, which at the time planned to deliver Sailfish devices later this year.

"Our aim is of course to continue this project, but first we need to get by the immediate financial struggle," the Jolla spokesman said.