For those who prefer to buy a mobile network-ready iPad Air over two years rather than pay Apple's higher upfront price, UK operators Vodafone, Three, and EE have released their pricing for the iPad Air.

Depending on how much time you spend away from a wi-fi network, another option is the 2GB 3G plan for £32 a month, which carries a much lower £29 upfront fee. Similarly, the 4GB and 10GB per month 4G-ready plans have a £29 upfront cost, with monthly fees at £37 and £42, respectively.

Vodafone is reporting a two- to four-week delivery time for the tablet. 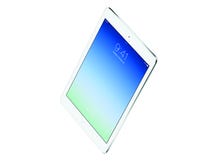 Buying an iPad Air? Live in Europe? Here's where you need to shop

Where in Europe offers buyers the best deal on Apple's new 9.7-inch Retina tablet? We've got the answers here.

Three is leaning towards a more-than-you-can-eat approach to data on its iPad Air pricing, offering generous and lower-cost data plans, but at higher upfront prices than Vodafone.

The 16GB iPad Air is available at Three for £179 on a £25 per month plan, which includes a 15GB data allowance. The device cost falls to £119 for customers who pay £29 a month for the same amount of data, while the £15 per month plan, which offers 10GB of data, carries an upfront cost of £499 — equivalent to Apple's outright purchase price.

Three and Vodafone are not selling the 128GB mobile data iPad Air, which retails at Apple for £739. Meanwhile, O2 has not announced plans to sell the iPad Air.

Like Three, LTE-friendly network EE generally has higher upfront costs on its plans, but slightly lower monthly charges than Vodafone. EE's pricing is built around 3GB, 5GB and 8GB plans that cost £25.99, £30.99 and £35.99 respectively, with device costs falling with larger data plans.