Vodafone, EE, and O2 opened up pre-orders for the iPhone 6 and 6 Plus this morning, but only Vodafone's site remained up in the face of what was thought to be a rush of orders.

While UK mobile networks typically reveal pricing and tariffs for new iPhone straight after launch, this year, operators decided to remain coy on such details until pre-orders opened today.

However, there's more of a wait ahead for would be buyers of the latest Apple handsets. Possibly due to massive interest in the new iPhone 6 devices, EE's entire website has been down for maintenance ever since it announced on Twitter that it was taking pre-orders, while O2's iPhone 6 page has been down for hours because its "online shop is very busy", according to a message on the site.

Vodafone's site is up though and it's offering the 16GB iPhone 6 for no upfront cost on a two-year contract with its 10GB and 20GB 4G network data plans, which respectively cost £53.50 and £58.50 a month. 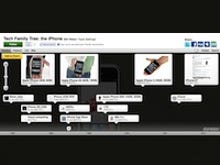 But, given the apparent interest in the iPhone 6 Plus with larger storage, buyers may be more interested in pricing for the 64GB and 128GB options.

While EE's site remains down at the time of publication, EE has provided some sample pricing for the iPhone 6 and iPhone 6 Plus.

Buyers at Apple’s store can tack on a starter packs from Three and O2 for £15 that offer 30 days of voice and data. Three has yet to open up pre-orders, but is expected to do so this afternoon.

While the mobile networks' sites may have struggled on iPhone 6 pre-order day, Apple's own store remained online. However, though shoppers were able to place their orders through the site, some models are now only available with several weeks' delay.

Delivery delays can mean either a company couldn’t build enough of a product in time, or that it underestimated demand for it (perhaps deliberately to generate interest and an air of scarcity). If it's the latter, Apple could be on a winner with the iPhone 6 Plus, particularly the gold version: Apple's UK website is currently reporting a three to four week dispatch delay for the 16GB, 64GB and 128GB versions of the iPhone 6 Plus in gold.

For those hankering after a silver or space grey iPhone 6 Plus, there's less of a wait ahead: Apple is reporting seven to 10 business day delivery times for both colours across all three storage options.

Apple expects to deliver the space grey iPhone 6 on the official availability date, next Friday 19 September, for the 16GB and 128GB models, while the 64GB model will be delivered within seven to 10 business days.