Full Bio
Posted in Between the Lines on December 5, 2013 | Topic: iPhone

China Mobile, the world's largest carrier with about 700 million subscribers, will soon offer the latest iPhone, opening Apple up to the largest single cellular market to date. 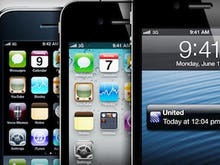 iPhone 5 launches in China, Apple shifts focus away from U.S.

Apple has launched the iPhone 5 in China, a significant milestone for the company. Why? Because Apple generates 15 percent of its revenue from the country. But not for much longer: that percentage is set to rapidly increase over the 2013 fiscal year.

Citing sources familiar with the matter, The Wall Street Journal first reported the long-awaited (and highly anticipated) move on Wednesday.

The rollout is expected to begin later this month with an unveiling event planned for December 18.

It's been a long time coming. The iPhone is now available on almost every major Western and Asian cellular carrier bar China Mobile. The hangup was attributed on the most part to the carrier's inability to provide 4G services, which it has been working on for the past few years.

China Mobile also runs a different 3G hardware infrastructure than China Unicom — the world's third-largest network with more than 125 million customers — which led to headaches at Cupertino. It wasn't as simple as just building a new device to gain compatibility as it did with Western devices that require CDMA versions over GSM, for example. It required procuring the correct hardware and the appropriate licenses.

In the end, both China Mobile and Apple aimed to can skip the 3G incompatibilities and jump straight on the cellular giant's LTE network. And that day landed. Chinese authorities finally granted the carrier licenses to operate the higher-speed networks, paving the way for 4G compatible iPhones to work on the network.

China remains vital to the iPhone's growth. Apple's main bread and butter is the smartphone unit, which takes up in nearly half the company's revenue at its latest fiscal fourth quarter earnings . But growth overall has been slow — even in China, with a massive 1.3 billion potential reach. So far, Apple has only been able to secure deals with the smaller Chinese carriers.

Hitting China hard has been an investment worth it in the end, but the payoff will come in the following fiscal quarters.

According to Trefis research, China Mobile may be able to sell about 1.5 million iPhones per month, totaling 20 million additional iPhone activations during 2014.

That alone would push the company's iPhone revenue up by as much as 17 percent year-over-year compared with 2013, ended September 28.