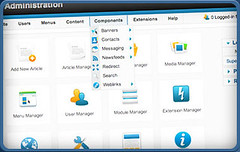 How remiss. I missed the Joomla! 1.6 release announcement on 10th January. Joomla! is a rather polished and presentable Open Source Content Management System used for building middleweight multi-user websites. In terms of functionality, customisability and difficultiness, it lies between WordPress and Drupal.

To be honest, I have been using WordPress an awful lot the past couple of months (using the resplendent Multisite functionality, of which more in a later post) and also Drupal. v6, though, not v7, I’m not quite hip enough to be using 7.

The most significant Joomla! 1.6 developments appear to be a user-defined category structure, finer access controls and semantic markup (1.5 was quite unsemantic in parts). I like Joomla!, it’s easy-to-use and pretty powerful, so this is a welcome upgrade.