Golf may not be the most enthralling of sports to some. Nobody gets injured and rarely does a fight break out. But for the thousands of people at the 2015 Masters Golf Tournament, they live and breathe the game. There are millions around the world watching on their televisions, smartphones and tablets, anticipating every move, and scrutinizing every putt and drive.

Analytics and clever algorithms helped IBM determine exactly how many servers it needs to run the Masters' website -- including at peak moments of the tournament.

This year at the world's biggest golfing event, fans are about to get an added bonus. IBM has created a technology that aims to bring golf fans closer to the game -- no matter where they are in the world.

The idea is simple. IBM wants the millions who can't make the annual pilgrimage to be as close to the action as they can. Through their mobile devices and the website, fans can quite literally track the golf ball as it makes its way through the course.

Grabbing data from sensors connected to the internet (so-called "Internet-of-Things" devices), IBM wants to make raw data a little more insightful for the digital user. No more are there endless scorecards and tables packed with figures crammed on a webpage; the cloud giant wants to provide the core information the viewer wants in a captivating, not alienating way.

"It's more engaging for fans, it offers business value, and it helps to expand the audience," said John Kent, IBM's technology manager, at a lunch meeting.

Here's how it works. The Augusta National Golf Club, which hosts the Masters every year, has dozens of lasers scattered throughout the course. Those lasers kick out a number of different pieces of data, including the location of the ball (determined on three-axes) and the resting position of the ball, which IBM runs through its cloud and visualizes. The end result is a play-by-play visualization that allows the viewer to interact and see the ball's course, the distance of each drive, and other interesting nuggets of data. And this happens in a matter of seconds. 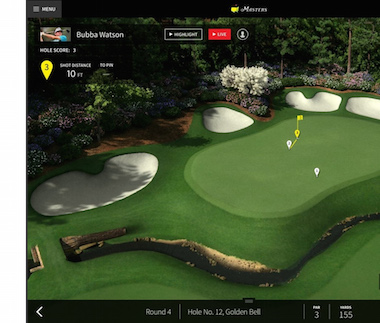 Simply put, you can take any device and crank open the Masters' website, and see how the ball traveled throughout the course. Using the HTML5 web standard, any smartphone or tablet user can access a simulated map of the course. iPad users have the benefit of using the internal gyroscope to visualize the play from any angle.

That second-screen experience, IBM says, helps bridge the physical with the digital world and the company hopes it will bring more people to the tournament. (If you're wondering what the company gets from it? A longer sponsorship worth millions of dollars.)

"We're trying to tell a story with the collected data," said Noah Syken, IBM's vice-president of global sponsorships. "It's an entirely new way to experience a golf tournament."

Track debuts on the Masters' website at start of play Thursday.

Disclosure: IBM provided travel to the Masters. No non-disclosures or agreements were signed.