Lenovo is shaking up its tablet offering with Miix, its latest entry to its multi-mode devices line-up. 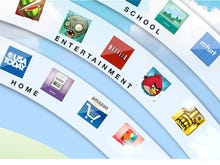 But don't be put off by the silly name. (It is a silly name.) Its killer feature is the multi-mode feature, allowing users to work with the device as a tablet and as a laptop. With a "quick-flip" detachable folio keyboard-embedded case, it can switch from PC mode to tablet mode in an instant.

It comes with 64GB of built-in eMMC storage — expandable to 32GB with a microSD card — and comes with the usual Bluetooth 4.0, Wi-Fi networking, and optional 3G-GPS connectivity.

Weighing in at just 1.2 pounds and less than a half-inch thin, its battery will run for up to 10 hours.

The Lenovo Miix will be available later this quarter — no specific release date was given — and will be priced reasonably for medium- to large-sized enterprises at $500.

Along with the Miix announcement, Lenovo also launched new S Series and U Series devices, continuing its push into the tablet market. The company continues to rise in the PC shipments table, according to IDC figures , and it's also ramping up its tablet offering.

The devices will come with unspecified pre-loaded software to improve user experience and add core enterprise features. No word on whether or not it will come with Lenovo Cloud, its eagerly anticipated cloud-based products, which only recently saw password synchronization service Reach debut first .