I’ve spent the last few days with LG’s watchphone. The GD910 is not the first watch to incorporate mobile phone capability, but it is the first I can remember beeing embraced by a major network operator in the UK (correct me if I am wrong). Orange is selling it for £500 on PAYG.

OK, maybe ‘embrace’ is not quite the right term. The GD910 went on sale in one store, London’s Bond Street Station shop, late in August. From mid September it was available to buy via the Web, but only in limited numbers and not via Orange’s usual orange.co.uk site, but via its accessories site at www.orangeaccessories.co.uk/LGWatch.aspx.

Anyway, my experience leaves me with mixed feelings.

The physical design and build are both good. The build materials are solid and the watch is nicely understated. Anyone glancing at your wrist would think you were wearing a slightly oversized timepiece rather than a somewhat fancy, smartphone-a-like, device. 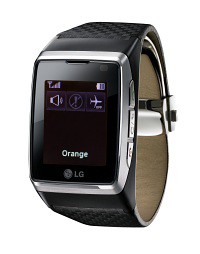 What it does is impressive. The 1.4 inch, 128 x 160 pixel screen is capacitive and extremely responsive to finger-sweeps and presses. That’s just as well, actually as it is the main way of getting around what the GD910 has to offer. You can use voice control for some functions, though, and it is invoked by pressing one of the three side buttons.

All but the first of these inabilities is really not much of a problem as the small screen would make them pesky to use. MMS might be a plus, though. The camera is VGA which would not present MMS with any problems. But taking photos is tricky. You’ll probably need to take the watch off, then point its front at your subject and sneak a peek round to frame a shot. I found that a lot of my test shots had my face in one corner. And of course image quality is poor.

Video and voice calling are rather fun to do for the first few minutes. But there are some drawbacks, most notably that you need to use the provided Bluetooth headset if you don’t want everyone around you to be able to hear both sides of a conversation. There are no connectors on the device for a wired headset (or indeed for anything else). You’ll need Bluetooth for music playback too. A2DP is supported, but you only get a mono headset in the box. 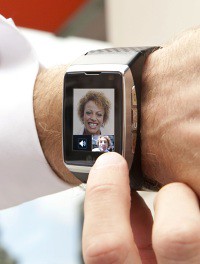 The GD910 will sychronise diary, contacts and to dos with Outlook on a PC via the provided software and you can access the 80MB of memory in USB mass storage mode too. PC connection, like charging, requires the use of a cradle which is bulky to carry around and which you will probably need to use every couple of days to juice up the device.

Data entry relies on a small mobile phone style touchpad with T9 or multitap as you prefer. I found this fairly easy to get along with, but I’ve got quite small fingers.

After a few days of use I decided that the GD910 is a well made piece of kit which does what it claims to do well. The absent features you’d normally want from a smartphone aren’t really missed, and any comparison with the GD910 and a smartphone would be misplaced. But the need to use a Bluetooth headset was a pain. Then there is the price. It’s a lot to pay, even for a bit of sci-fi on your wrist.