By Steven J. Vaughan-Nichols for Networking | May 7, 2015 | Topic: Networking

Who doesn't love fast Wi-Fi? Thanks to 802.11ac, real-world speeds are finally cracking the 1 Gigabit per second (Gbps) barrier. With the new 802.11ac multi-user multiple-input and multiple-output (MU-MIMO) Wave 2 finally arriving in chipsets, Gbps speeds may finally become commonplace rather than exceptional. Leading the way is Linksys with the first Wave 2 router to market: The Linksys Max-Stream AC2600 MU-MIMO Gigabit Router (EA8500). 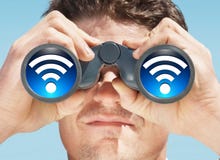 In theory, 802.11ac Wave 2 devices, when working with other Wave 2 enabled gear, can crack 7Gbps. Linksys, wisely, doesn't make any such claim. In the real world, Wi-Fi never runs as fast it does in a pristine lab environment.

Linksys does claim that the EA8500 with its Qualcomm MU | EFX MU-MIMO technology+ chipset can hit a combined 2.53 Gbps Wi-Fi speeds. That breaks down as 1,733 Megabits per second (Mbps) with 5 GHz and 800 Mbps with 2.4 GHz. I've benchmarked more Wi-Fi devices than I can recall, and I think what you'll see in your office will be more like 600 Mbps and 200 Mbps. That's still almost certainly a lot faster than what your current equipment is giving you.

The really interesting practical news isn't so much its raw speed. What sets Wave 2 equipment apart is that MU-MIMO can transfer data clients simultaneously. Older Wi-Fi and 802.11n and 802.11ac standard gear can only serve one client at a time. This means that not only are all the tablets, laptops and so on sharing of capacity, but as more devices connect, everyone has to wait in turn to be served. This is what leads to those throughput drops that makes so many business trade-shows so painful.

With EA8500's implementation of 802.11ac MU-MIMO, up to four clients at a time can be supported. Better still 802.11ac enables beam-casting. With beam-casting these routers, instead of wasting their signal in a sphere, aim their signals to their devices. The practical result is better range for 5GHz Wi-Fi.

Before getting too excited about the EA8500, keep in mind for it to really show off its speed you'll need 802.11ac Wave 2 chipsets in your laptops, tablets and other hardware. While you will see better performance with 802.11n and 802.11ac-equipped devices, you won't see everything the EA8500 is capable of with older devices

The EA8500 also comes with a 1.4 GHz dual-core Quallcomm SnapDragon CPU and four Gigabit ports. It also has a USB 3.0 port and a combo USB 2.0/eSATA port. The USB and eSATA ports are ideal if you want to attach storage to your router.

Linksys is pointing the EA8500 at the home market. "MU-MIMO technology revolutionizes the wireless experience in the home," said Mike Chen, Linksys's VP of product management. "The average home has more than 8 devices connecting to the Internet, and they're not used for just sending emails and tweets. We're streaming movies and TV shows in high definition, we're video chatting with our friends and family, and we're playing video games against competitors around the globe, all on different devices and often at the same time."

That's fine, but the EA8500 will also work well for small businesses and departments. At a list price of $279.99, I expect many of these high-speed routers to show up in offices.