In 1991, Unix was an important but secondary x86 operating system. That year, on August 25, a mild-mannered Finnish graduate student named Linus Benedict Torvalds announced on the Usenet group comp.os.minix that he was working on "a (free) operating system (just a hobby, won't be big and professional like gnu) for 386(486) AT clones." No one knew it, not even Torvalds, but the technology world was about change forever.

Want a good tech job? Then you need to know Linux and open-source software. One of the best ways to pick them up is via a Linux Foundation course.

Also: Linus Torvalds: Get ready for another 30 years of Linux

Torvalds and I have talked about Linux and its history, and he's both pleased and bemused by Linux's rise. But, as for the operating system's birthday, Torvalds said, you can argue it has four birthdays:

"The first newsgroup post is more public (August 25), and you can find it with headers giving date and time and everything. In contrast, I don't think the 0.01 release was ever announced in any public setting (only in private to a few people who had shown interest, and I don't think any of those emails survive). These days the way to find the 0.01 date (September 17) is to go and look at the dates of the files in the tar-file that still remains.

"So, both of them work for me. Or either.

"And, by the way, some people will argue for yet other days. For example, the earliest public semi-mention of Linux was July 3: that was the first time I asked for some POSIX docs publicly on the Minix newsgroup and mentioned I was working on a project (but didn't name it). And at the other end, October 5 was the first time I actually publicly announced a Linux version: "version 0.02 (+1 (very small) patch already."

In those early days, Torvalds was encouraged by his professors at the University of Helsinki.

"Most of the time, Linux was very much under the radar -- it's not like it was ever a university project and I didn't want it to be -- but Helsinki University (at least the CS department) was very open to unofficial 'extra-curricular' activities. I don't think Linux was necessarily all that special in that way either. It just happened to grow to be something big. I never got the feeling that you had to work a special way, or that only the sanctioned official university projects were given resources. For example, the CS department ended up trying out (and then using fairly widely) Linux machines running X as thin clients, but also a DEC Alpha machine running Linux in the server room. Sure, Linux use in universities wasn't exactly unusual, but I think they were particularly open to it because it was a local, cool project."

It didn't take long for Torvalds to realize that his little project wasn't going to stay little for long. By the end of 1991, it was gaining more attention than the still-born GNU Hurd or Minix [Andrew Tannenbaum's ground-breaking free software educational Unix operating system]. Torvalds explained:

"I started doing some paging to disk around Christmas 1991, and at that point, Linux was doing things that Minix didn't. It was one of the reasons why the release numbering jumped from 0.03 (perhaps November 1991) to 0.12 (January 1992).

"That wasn't exactly radical (people had made Minix extensions that did paging etc), but it was a sign that Linux was starting to do things that I wasn't used to Minix doing.

"By summer 1992, we had X running and Linux just looked like a completely different animal from the Minix I had grown used to (but I don't even know what Minix did afterward).

"The rest happened pretty gradually and never really hit me as being as exceptional as the early 1992 realization that there were actually people I didn't know who were using and tinkering with Linux."

The term for what was happening with Linux hadn't been invented yet. Today, we know it as open-source. This concept of developers working together on jointly held and managed code became the single most important software development method in history. While Linux would not have existed without Linus, influential early Linux developers such as Theodore Ts'o, James Bottomley,  Gerald Pfeifer, and Greg Kroah-Hartman were also vital to its growth.

Even as Linux was picking up steam, Torvalds didn't see where it was going. "The '91 model year Linus really didn't think 30 years ahead, and if he had, he wouldn't have thought that the experiment he was working on would be around at all. Other projects seemed much more serious."

In those very first days, Linux wasn't formally known as Linux. Torvalds explained, "Linux was my working name, but I never wanted to release it as Linux. Linux was a perfect working name, but if I actually used it as the official one, people would think that I am an egomaniac and wouldn't take it seriously. So I chose this very bad name, "Freax," for "Free Unix." Fortunately, the first Linux administrator Ari Lemmk, decided Freax was a silly name too. Hence, he actually named it Linux because he thought this internal project name was Torvalds first choice.

Looking back at it all, Torvalds said he usually thinks "some of the early stuff that really probably isn't all that big deal anymore, but that felt big to me just because they were surprised and/or important at the time."

Also: That Linux lawsuit: 20 years later, SCO vs IBM may finally be ending

For example, "personally, 0.03 was a big step, which is when Linux became self-hosting for the first time, I think. And 0.12 was when suddenly it was almost useful to some people, and you could actually do some limited real work with it (and when the aforementioned "hey, people I don't know are using it" happened). Admittedly you had to be pretty hardcore to play around with it, but there are still active kernel developers around from that timeframe."

Trying to look at the bigger picture, Torvalds now thinks the period in early 1992 -- when Linux switched to using the Gnu Public License version 2 (GPLv2) -- was especially important. He recalls, "It wasn't the original license, but I'm convinced it's a big part of why Linux became so widespread. Not everybody loves the GPL, and I've had my own issues with the FSF [Free Software Foundation], but I do think the GPLv2 has been a huge deal, and people shouldn't dismiss the licensing issues."

"I think the companies getting involved has been hugely important - and that may sound so obvious as to be trite and stupid, but some corners of the open-source community have been fairly negative to any commercial involvement." 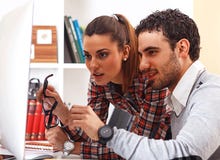 Software development can be carried out by almost anyone with only a little technical know-how.

But, the commercial interest in Linux has been important.

"It's a cultural thing, and while it started out small (with various commercial Linux distributions starting out already in 92), it was a fairly continual thing. There were a few big notable events along the way: IBM coming on board, Oracle, the Red Hat IPO, etc, but I think the underlying big thing really is that co-existence between the open-source kernel people and a lot of very different companies. I think that's fairly unusual and unique.

"There have been the purely technical ones. That's been so constant that it's hard to point to anything really particular. I think the first ports to other architectures were perhaps conceptually one of the biggest steps (and particularly the Linux/alpha port) because it changed the whole target landscape.

"Of course, the version control systems (CVS) "BitKeeper, and then obviously Git, were both big steps, simply because of how they changed my ability to manage the source code. A few corners of the kernel tree had tried CVS [Concurrent Versions System], but it really wasn't a useful tool for something that distributed. So BK and git didn't change the kernel directly, but made some of the progress possible indirectly."

Indeed, Torvalds has told me that it was only after he created Git that he felt like a successful programmer. After that, he no longer needed to fear that Linux was a one-off.

Looking ahead, Torvalds sees himself keeping on, "I'm 51 years young, I enjoy what I'm doing. What would I do if I didn't do Linux? Puttering around in the garden? Not bloody likely. You could ask me again in a couple of years when the kids are all flown (one done, one doing graduate studies, one still undergrad). Not that I expect that gardening will look any more likely than either, but you can ask."