Well, it didn't take nearly as long as I thought that it would. Hot on the heels of my post about Mint Debian and updates, new base release ISO images for both the Gnome and Xfce desktops were made available at the end of last week. I find the fact that they were released together to be particularly encouraging, because it appears that the Xfce distribution is being treated as an equal to the Gnome distribution, rather than as a poor step-child, the way some other distributions do it. As I suspect Xfce will be getting more interest in the near future because of the uncertainty and unhappiness about Gnome 3, this is good news.

The Release Announcement in the Mint Blog contains some highlights about this release, but it seems rather short compared to a lot of other such announcements. The reason behind this is basically the same as the reason the release came out so quickly, and with an Alpha/Beta/RC phase. Because Mint Debian is now a "rolling release", the new base distribution is actually just a roll-up of the old base plus all of the patches that have been issued in the interim. In fact, in all honesty, if you have a running Linux Mint system which you have kept up with updating, this new base release is a ho-hum sort of thing, because you are already running this version. But if you need or want to install Linux Mint Debian from scratch, this release is extremely good news, because it takes care of the problems I have been writing about recently with updating.

Linux Mint has given up on the "700MB CD-R" size restriction with these releases, and they are each over 1GB in size. The images are compatible with the Unetbootin utility, so they can easily be converted to a bootable USB stick, or of course you can burn them to a DVD. Either way, downloading and installation are quick and easy, and in well under an hour you can have either (or both) versions installed and running.

The Gnome version uses the excellent Mint Menu system, so the basic desktop and Favorites menu look like this: 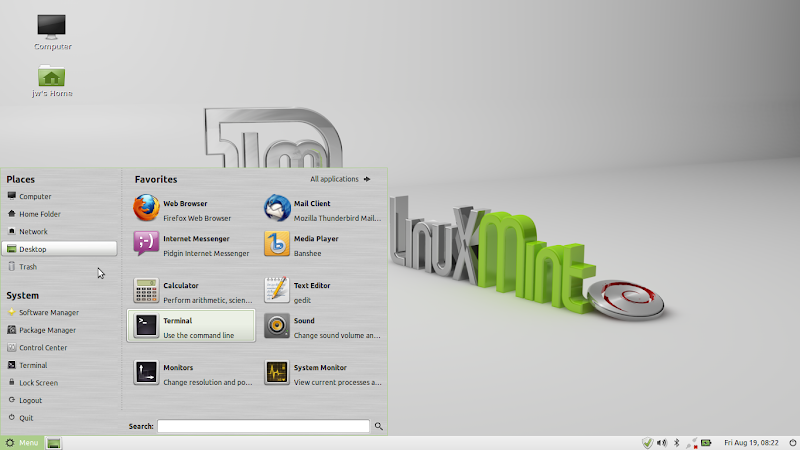 The Xfce version, using its own menu system, looks like this: 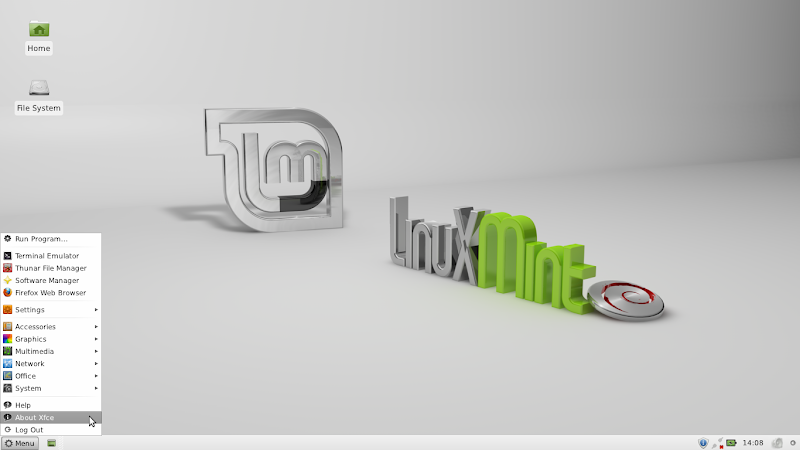 One of the nicest new features of this release is visible as soon as you boot the installation image. The Mint developers were faced with the fact that their existing installer was derived from the Ubuntu installer (ubiquity), and wasn't really well suited to installing a Debian based distribution. The Debian installer, on the other hand, is sort of... well... "lacking" in comparison with most modern installers, so I'm sure they wanted something both visually and functionally better than that. Their solution was to write their own MintInstaller, and as usual they have done an excellent job of it - it is simple and fast.

Of course these new distributions include the latest MintUpdate utility, with the "Update Pack" feature I described last week. By default they are configured to use the Mint "latest" repository, the most conservative setting which will give you the most stable system. At the other extreme, I have changed this to point directly to the Debian "testing" repository on my HP Pavilion dm1-3105ez. That system has already updated to Linux kernel 3.0, which includes support for the Ralink 5390 WiFi adapter, so I am quite pleased with that.

Other significant features of these distributions: the Gnome distribution includes version 2.32, although there have been a few hints indicating that Mint might switch to Ghome 3 sometime soon. The Xfce distribution includes version 4.8, and has some of the Gnome utilities integrated where necessary, such as the gdm session manager (login), and Network Manager. Both include Firefox for web browsing and Thunderbird for mail/news, and of course the LibreOffice suite. As we have come to expect from Linux Mint, there are excellent multimedia programs includes, for both music and video playback. If any of your favorite packages are not included, there is the excellent Software Manager (mintInstall) utility. This gives you a very nice overview of available packages, grouped by functional category, with descriptions, screen shots, reviews and links to their home web page. I have found that mintInstall is also very good at installing applications from other desktops and getting all of the necessary libraries and support files with them. I specifically use it to install KMyMoney, digiKam and Picasa onto Mint Gnome, and for all three it is a matter of select, install and run, no great fuss.

There is one other hint at some very good news in the FAQ of the release announcement. Apparently there are KDE and Fluxbox versions of Mint Debian are in the works, and should be available in the near future.

With these new releases making installation from scratch very easy once again, I can whole heartedly recommend Linux Mint Debian Edition to anyone who wants a good Linux system.