Closing thoughts: The latest iPhone is an impressive product and it seems loaded with new features - from design to software. I was pleasantly surprised with pricing. The Retina Display was impressive. I remain disappointed that's it's AT&T only but for those who already love their iPhone will likely want to upgrade. Despite AT&T dumping unlimited data plans, the upgrade for iPhone lovers seems worth it. More analysis, video from WWDC and a larger photo gallery are on deck. For all incoming content on WWDC see the Apple topic page.

11:53 a.m.:  Jobs back. The product is "really extraordinary" and he encourages everyone to get their hands on one. He also takes a moment to thank the teams of people working on the device for the past 18 months. 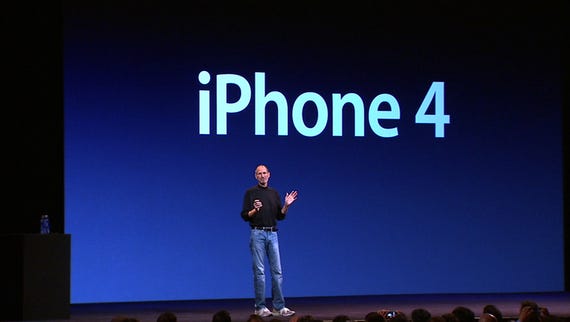 11:44 a.m. iOS 4 upgrades. Offering for iPhone 3Gs and iPhone 3G - but not all features supported n 3G - as well as iPod Touch (but not first generation.) Upgrades will be free for all products on June 21.

11:40 a.m. Price and availability. It comes in two colors - black and white. Pricing is $199 for 16 GB model and $299 for 32 GB model. Also announcing AT&T is making "an incredibly generous upgrade offer." If contract expires anytime in 2010, you can be eligible up to 6 months early if you re-up for two more years. That should stoke an upgrade cycle.

11:39 a.m. They are making FaceTime an open industry standard, he said.

11:38 a.m. Big rounds of applause for the video demo. "This is one of those moments that reminds us why we do what we do," says Jobs.

11:35 a.m. It uses either front or rear camera and works in either portrait and landscape mode. It's WiFi only in 2010. "We need to work a bit more with wireless carriers," he says (and gets a few chuckles).

11:33 a.m. There's a couple of frames that freeze-up - and he blames those who are still using WiFi in the room...  He says he grew up watching TV shows like the Jetsons, with their views of the future. And now it's real...video calling.

11:32 a.m.: Jobs walks over to a chair and sits down. He talks about making the first call on an iPhone back in 2007. He does it again but this time, it's not just voice. It's Video

11:31 a.m. Those are the eight things he wanted to share about iPhone 4: "I think it's a lot more than people thought it was."

11:30 a.m.: Jobs is talking about the overall U.S. mobile display advertising market and notes that the $60 million commitment from brands for the second half of year is about half of the total market.

11:24 a.m.: He highlights some of the brands that have signed up for iAds in the second half of the year, including Target, Nissan, Sears, Citi and, of course, Disney, among others.

11:21 a.m.: Feature 8 is iAds, which the company is trying to reach advertisers to bring some of the emotion and interactivity of consumer - without forcing user out of the app. This is nice, but we saw this when Apple introduced the new OS earlier this year.

11:20 a.m. iBookstore becomes third store platform, joining iTunes store and App store on iPhone. There are more than 150 million accounts with credit cards ready to buy your apps, he said.

11:17 a.m. iBooks on iPad, iPhone and iPod Touch. They all work wirelessly. Can purchase and download a book to any of the products - no computer necessary. Users can download to all devices at no extra charge. You only have to buy it once. And, iBooks will sync your place, bookmarks and notes across all devices. Blow to Amazon?

11:15 a.m. Another major milestone for iOs - this month, the company will sell its 100 millionth iOS device. "There is definitely a market for your applications. No one even comes close to this."

11:14 a.m. Already has Google and Yahoo search but now adding Bing search as an option - Google will remain the default. But users have choice. Jobs talking up Bing and the good job that Microsoft has done with it.

11:09 am: The demo works like a champ, pages load on the demos quickly - attributes it to people (except this rebel blogger) for shutting down. Glad I'm using an aircard (Verizon by the way) instead of WiFi. 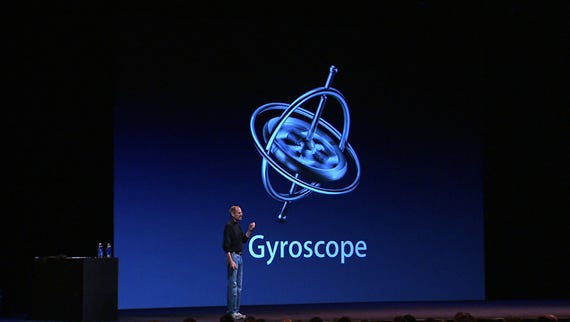 11:04 a.m. Jobs said he figured out what caused overload. Asking everyone - bloggers and all - to shut down laptops and so on so he can do the demos. Says there are 570 Wi-fi base stations in the room. That includes Mi-Fi. It's kind of embarrassing that Apple has to ask that.

10:58 am: One theme here is that Jobs is positioning the iPhone as a high-end device with his references to all glass displays and Leica.

10:55 a.m. Going from 3 megapixels to 5, Apple has kept pixel size the same, not smaller - as others do. Now, he's showing high-quality, untouched photos.

10:54 a.m.: Feature number 5 is a whole new camera system built into iPhone 4. People like to talk about things like megapixels when it comes to cameras but what cell phone cameras are really about is capturing photons. Camera has 5 megapixel sensor and also includes a backside illuminated sensor.

10:51 a.m.: The gyroscope is actually pretty impressive and adds a whole new experience to gaming apps

10:51 a.m. Feature four is a 3-axis gyroscope, which is teamed with accelerometer for 6-axis motion sensing.

10:50 a.m.: He talks about improvements that include 7.2 mbps on the down and 6.8 on the up - which are theoretical because the carriers don't support it yet.

10:47 am: On to the third feature - the iPhone 4 is powered by the A4 chip. We're looking at the inside back. There's the chip, a Micros SiM tray. Battery is bigger. Because of that and the A4 performance, talk time and browsing times are up - 7 hours of talk time, 300 hours of standby.

10:46 am: Spec time for iPhone 4. 3.5 inch display. Same in plane switching as iPad, which Jobs says is better than OLED. Contrast ratio of 800:1. Apps will just look better. Jobs says display is the most important component and the iPhone display should set the standard.

10:43 a.m.: Jobs suggests that he needs some help. Someone yells out a comment about AT&T network and he responds by saying they're using WiFi.

10:42 a.m. He's switching gears away from "live" demo and now is using store pictures to compare.

10:41 am: The WiFi in Moscone Center has slowed to a crawl and that's impacting Steve's demo. Awkward silence...He even asks users in the audience to maybe jump off the WiFi. At one point, the silence is almost deafening in the auditorium. You can't help but laugh at that one.

10:35 a.m.: Because there have been a few photos of this around, people want to know what the lines, the stainless steel band with slits on the side of device. He calls it "brilliant engineering" that uses part of the stainless steel as the antenna system. The big question: Can the antenna compensate for AT&T's weaknesses? Just asking.

10:32 a.m. Glass on front and rear. Stainless steel. He calls it "unheard of" in consumer products today. "And it's really thin"

10:28 a.m.:  Now. we're going to talk about the iPhone. There are a lot of reports and data points out there, he says. Smartphone share from Nielsen puts iPhone for second place for Q1 - with RIM in first place. He notes that its 28 percent more than three times Android's 9 percent share

10:26 a.m.: Jobs is back on stage. We're still talking about apps - last week, the company crossed 5 billion downloads.  Jobs' favorite stat: the 70 percent that goes to developers, to date, has now crossed the $1 billion mark.

10:25 a.m.: There are new features of Guitar Hero that are exclusive to iPhone, including a new strumming feature that uses the multi-touch feature on iPhone. We're watching the demo now.

10:24 a.m. Next up is Activision and exec Karthik Bala is on stage to talk about Guitar Hero.

10:19 am: Next up is Zynga, which Jobs calls a "remarkable phenomenon." CEO Mark Pincus is now on stage to introduce Farming for iPhone. (Very light applause). Farmville is popular and now it will be on the iPhone. Do we really need Farmville notifications on the iPhone? This demo is a bit lame.

10:17 am: It's an app demo parade with Zynga et al. Nice apps but would rather get to the news.

10:16 a.m. Jobs wants to talk about three entertainment apps coming soon. First up is Netflix CEO Reed Hastings, who joins Jobs on stage to talk about Netflix on iPad. He says Netflix  app on iPad has been successful and now, Netflix will be coming to iPhone this summer. Here comes the demo.

photo gallery . 10:13 am: Jobs wants to clear the air about app approval process. The company gets about 15,000 apps submitted per week in 30 different languages. He says 95 percent are approved within 7 days. Why are the five percent not approved? 1) Because it doesn't do what the developer said, 2) use of private APIs. They do not support them because they could break if the OS updates and 3) They crash. Defensive? Perhaps. But does send the message.

10:11: Next up is the app store. Apple supports two platforms. First is HTML5, open and uncontrolled platform. He says the company fully supports it and behind it 100 percent - and stresses that it's fully open. Second platform is the App Store --- a curated platform with more than 225,000 apps and calls it the most vibrant app store on the planet. Interesting reference to curated as a asset of App Store.

10:10 am: Jobs is announcing some enhancements. Users can add notes and added a control to tap and bookmark a page. There's also now the ability to view PDFs in in the bookstore.

10:07 am: Some iBooks color: Updating ibooks on ipad. Here are a few stats: in first 65 days. more than 5 million books downloaded. Five of six biggest publishers with ebooks in store that share of ebook sales is about 22 percent.

10:05 am: An iPad update first. 2 million sold in 59 days - that's one every three seconds, Steve says. We watch a video clip of international press coverage. He says there are now 8,500 native apps available and downloaded 35 million times. Now, he's showcasing some popular apps.

10:02 a.m.: Jobs says there are more than 5,200 people in attendance from 57 countries and the conference sold out in eight days. More than 120 sessions this week and more than 1,000 Apple engineers on hand this week.

10:00 a.m.: Steve Jobs takes the stage. Big round of applause and standing ovation...

9:45 a.m.: I'm in my seat here at Moscone West in San Francisco, some 15 minutes before Steve Jobs is scheduled to take the stage to kick off the Apple Worldwide Developer's Conference and, so the rumors say, announce the new iPhone, among other things.

As I entered the building, both Howard and 4th Streets were packed with news trucks and mobs of people lined up waiting to get in. As people came off the escalator on the third floor, many literally ran inside for an up-close seat. Ran...

The room is packed and some Louis Armstrong jazz (well, Hello Dolly) is playing, instead of the usual Classic Rock Clapton type tunes.

Stay tuned. We'll be underway in just a bit.