The thing about wireless mice and keyboards is that they have batteries, and these need recharging. If you are not really a fan of the need to keep batteries handy, then this alone could put you off going wireless.

Logitech may have put an end to that particular barrier with its rather clever solar keyboard, the K750.

Yes, we know. Solar powered kit is often not what it's cracked up to be. But in this case we think Logitech has got things right.

There are two long solar panels sitting at the top of the keyboard, and we found that even in a home office with no lights switched on these gained enough power from ambient lighting to keep the keyboard alive and kicking through the entire period of our review.

Now admittedly we do sit near a window — but even so, there are rarely shafts of super-bright sunlight streaming through. Well, not in February anyway. Which makes it just as well that Logitech says the K750 can keep going for at least three months in total darkness.

The keyboard uses one of the Logitech unifying wireless dongles that will allow up to six mice and keyboards to be attached — handy if you work from a notebook and move between locations where you use different mice and keyboards.

The K750 is just 7.5mm thick. There are two rather plasticky feet you can use to raise it at an angle if you prefer this to having the keyboard sit flat on the desk. The rest of the build is a lot more solid than those feet, we're pleased to say.

The slightly indented keys (Logitech calls the design Incurve) makes the keys feel comfy under the fingers and there is a nice clicking sound when keys are pressed. 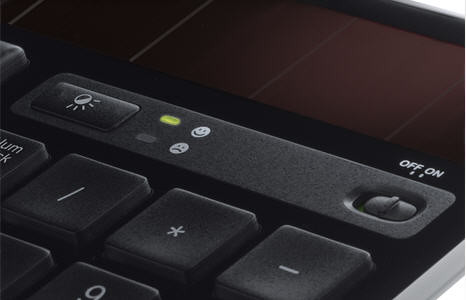 The Function keys have some embedded actions to control music playback, adjust volume and perform a few other shortcut actions, and there's a separate number pad and cursor keys. But there' not the abundance of shortcuts found on some keyboards, so the K750 shouldn't look out of place on a professional's desk.

And anyone worried about data leakage from the wireless connection can take heart from the 128-bit AES encryption that's automatically invoked whenever the keyboard is in use.

At £70 the price is perhaps a bit steep. But if Logitech produces an ergonomic keyboard with this solar technology inside, we might be persuaded to take the plunge.