Microsoft has announced a new addition to its low-cost smartphone range, the new Lumia 540 dual SIM, which offers some improvements on its predecessor, the ever-so-slightly-cheaper Lumia 535 dual SIM.

With the Lumia 540 dual SIM, Microsoft has once again expanded the range of price points and features among its lower-tier devices. The five-inch display Windows 8.1 smartphone will start shipping to the India, Middle East, Asia Pacific and Italy this May with a recommended retail price of $149.

It's a bit of curious release, given that Microsoft only launched the very similarly priced and specced Lumia 535 dual SIM last November, priced at around $140. Nonetheless, the 540 does bring a handful of improvements compared to its forerunner. While the dual SIM Lumia 535 and Lumia 540 share the same processor, display size, and memory, the newer phone includes a bigger battery, better display resolution, and improved main camera. 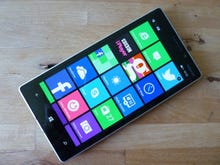 The phone comes with an eight-megapixel main camera and five-megapixel rear camera, 8GB storage, 1.2GHz quad-core processor, 1GB RAM, and microSD slot up to 128GB. The display meanwhile offers 128 x 720 HD resolution with a pixel density of 294 pixels per inch. But like the Lumia 535, it's a 3G phone. With the bigger 2200 mAh battery, Microsoft says the standby time with the 540 dual SIM is 24 days - 10 more days than the Lumia 535 dual SIM.

The device will ship with Windows 8.1 and the Lumia Denim firmware and will be upgradeable to Windows 10 when it's released later this year, though Microsoft notes not all features of the update will apply to all devices.

The phone will be available cyan, orange, white, and matte black - a narrower range than the Lumia 535.

With the Lumia 540 dual SIM, Microsoft now has over 30 separate variants of Lumia smartphone on the market, mostly in the mid to low-end of the spectrum - a move that has disappointed Windows Phone fans in the US waiting for a new flagship.

Microsoft has promised a new high-end smartphone this year based on Qualcomm's Snapdragon 810 processor, but the company told The Verge last month that this won't arrive until slightly after Windows 10 is released - likely sometime after June or July, no doubt giving it time to iron out some of the wrinkles seen in the preview so far.

Read more on the Lumia range