Full Bio
Posted in All About Microsoft on March 30, 2017 | Topic: Mobility

Even Microsoft is being swept up in Samsung Galaxy S8 mania.

On March 30, Microsoft announced that it is making available for pre-order the Samsung Galaxy S8 and Galaxy S8+ Microsoft Edition. Both phones will be available for purchase beginning April 21 at brick-and-mortar US Microsoft Store locations.

Details as to exactly what "Microsoft Edition" means are scarce. But based on an email I received from a Microsoft spokesperson, I believe this means these phones will need to be unboxed inside a Microsoft Store, connected to the Microsoft Store Wi-Fi and automatically populated with Microsoft apps, including Office, OneDrive, Cortana, Outlook, and more Microsoft apps.

(As an Android phone user who runs many Microsoft apps on her phone, this doesn't seem as crazy to me as it might sound. The more bizarre part, at least from my standpoint, will be seeing Android phones for sale in Microsoft Stores.)

The Microsoft Edition devices will retail for $749.99 and $849.99 (for the Galaxy S8 and S8+, respectively). Microsoft is not commenting on when or whether the company will expand availability of the Microsoft Edition Samsung phones beyond US retail stores only, the spokesperson said.

Microsoft announced with great fanfare at CES in 2016 its "renewed partnership" with Samsung and took the wraps off a new Samsung Galaxy TabPro S with Windows 10 there. That announcement was preceded the year before by the settlement between Microsoft and Samsung over their longstanding Android patent-royalty suit.

Since 2015, Microsoft has been lining up OEMs to bundle various Office apps and services with their Android devices. As of May 2015, Microsoft claimed to have deals with 31 partners offering Android tablets pre-installed with Word, Excel, PowerPoint, OneNote, OneDrive, and Skype. Samsung was one of the companies on that list. 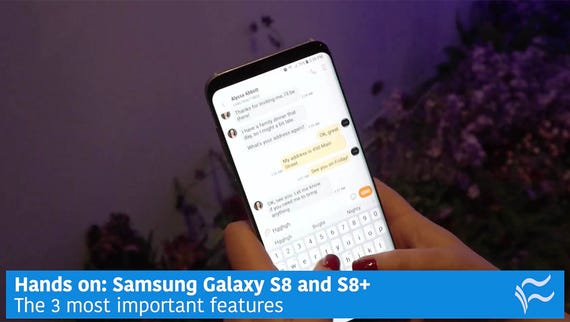