Microsoft has added another handset to its line of low-end Nokia-branded devices, aimed at first-time mobile buyers.

Buyers will likely get to see Microsoft's next flagship smartphone later this summer, but for now, the company has released the Nokia 105, a $20 device that runs on Series 30+ operating system.

The 105 includes a few key updates to its predecessor (also called the Nokia 105) that may be appreciated in some markets, including a dual-SIM variant and significantly more RAM. The new 105 has 4MB, allowing it to support 2000 contacts rather than the 500 contacts possible with the earlier device's 384kB of RAM.

The device probably won't excite anyone who's interested in high-end smartphones, but as Microsoft highlights, its "most affordable phone" is aimed at first-time mobile buyers and people who want a second phone. According to Microsoft, sales of the first Nokia 105 have reached 80 million units since it was launched in 2013. 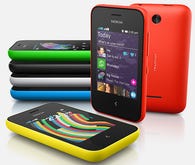 For those want something slightly more advanced, Microsoft launched Nokia 215 in January, and for an extra $9 provides a Series 30+ powered featurephone that connects to the internet and comes with Facebook, Messenger, Bing Search, Twitter, and the Opera Mini browser pre-installed.

The battery retains the same capacity as its predecessor, though the dual-SIM offers 25 days of standby time compared with 35 days for the single SIM device. It also offers 15 hours of talk time in both the dual and single SIM variants - about 2.5 hours more than the earlier 105 - and features an FM radio.

The devices will be available in June in a number of markets for $20, excluding local taxes.