It's nothing new; getting into the original Mac required a large gadget called the case-cracking tool to lever apart the seam of the case, as well as a set of Torx screwdrivers, although Apple's new MacBook Pro takes this to extremes. There are reasons for sealed units that have to be professionally serviced, as well as good arguments against them.

Sleek, seamless, integrated devices need careful construction; it's about fitting components together as much as it is about stopping you adding a different hardware component that might or might not perform well in the device.

But it's nice if hardware design makes it easy to replace the battery or upgrade the storage; even the sleekest PC notebooks have removable panels to simplify that.

Even if you don't want to tinker yourself, it means you can shop around if your device ever needs repairing. And if you don't care about the on-going costs of keeping your device working, can I suggest a charity donation, because you obviously have spare cash in your pockets?

The back of the Microsoft Surface looks as sleek and seamless as you can get, until you snap up the kickstand hinge. As well as giving you a stable surface it also reveals ten or so screws holding down a removable panel under the hinge mechanism. They're Torx screws (not even the Torx Plus or Torx Security screws) so you can get a screwdriver to open them easily. And that could mean the Surface will be cheaper to repair and easier to upgrade. 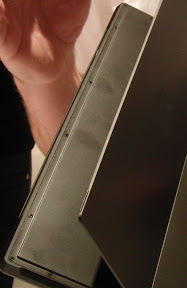 Screws neatly under the hinge 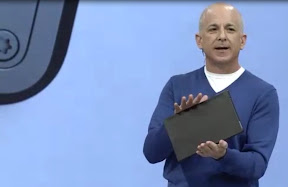 Close up of the Torx screws (top left)

And it wouldn't be surprising if the memory was soldered in the same way it is in the iPad and the latest MacBook Pros - that would avoid errors from RAM chips working their way out of the socket and possibly save a small amount of space. But Microsoft doesn't have the scale to have a custom connector on the SSD the way Apple does in its latest models, so you might well be able to upgrade the storage.

Being able to open the Surface yourself should make it easier to replace the battery when it stops taking a full charge (which all batteries do eventually), or take it to a third-party repairer instead of having to trek to a Microsoft Store.

I've often argued that tablets are appliances rather than general purpose computers, but that doesn't mean they have to hard to upgrade or repair. I can order official spare parts for my oven and dishwasher and fit them myself for a fraction of the cost of an accredited repair (one oven handle, one oven door, one dishwasher handle and umpteen oven lightbulbs later, I've saved a fair amount).

If Microsoft can make an ultra-thin tablet that you can still open up to repair, that's another tribute to its design skills.