Just over two months after the Surface Pro 3's June 20 US launch, Microsoft has expanded the availability of its new Intel-based i3, i5, and i7 tablets across the Asia Pacific and Europe, bringing its total number of markets up to 28.

The additional markets may offer the company a better chance of boosting Surface revenues,  which last quarter reached $409m , thanks mostly to sales of second generation tablets and the arrival of the Surface Pro 3, but hindered by an 'inventory adjustment' after Microsoft decided to kill a "new form factor" thought to have been the Surface mini.

The expansion will also be a test whether Microsoft's idea that the device can replace a MacBook Air resonates with consumers across the world. As ZDNet's Ed Bott recently noted, the MacBook Air has around a 30 percent share of a section of the PC market  that is actually growing — and rapidly too . If Microsoft can grab some of that for itself, it could only be a good thing. However, Microsoft will soon find itself battling for attention against a  new 12-inch iPad  that will be taking aim at the enterprise market. 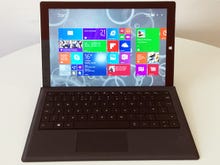 Microsoft Surface Pro 3 review: Impressive hybrid tablet, but keyboard should be bundled If you need a Windows 8.1 computer that's flexible enough to be a tablet, a laptop and even a desktop PC, then the Surface Pro 3 manages the trade-offs as well as anything on the market.

Microsoft also reaffirmed its Surface Pro 3 docking station will be available in all 28 markets. It's been available for pre-order for sometime, and will be generally available from September 12.

The docking station offers three USB 3.0 ports and two USB 2.0 ports for hooking in external monitors, keyboard, mouse, printer, speakers, and so on, as well as an Ethernet port, 3.5mm audio connection and a security lock. The item was already available on pre-order in the UK for a hefty £164.99, compared to the $199.99 price tag in the US.

The expansion comes days after Microsoft assured US customers of the i7 edition Surface Pro 3 that it had a fix on the way for an overheating problem affecting some a “small number” of the devices.

Join Discussion for: Microsoft's Surface Pro 3 now on sale in...