Having come to dominate the smartphone OS market, Android has built up a huge ecosystem around it. Now Google is hoping to pull off a similar feat in hardware through its handset arm, Motorola.

Motorola's Project Ara, announced on Monday, combines a smartphone exoskeleton with a variety of hardware modules that can be used to customise the device. 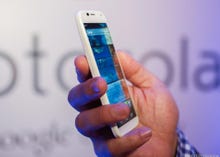 "Led by Motorola's Advanced Technology and Projects group, Project Ara is developing a free, open hardware platform for creating highly modular smartphones. We want to do for hardware what the Android platform has done for software: create a vibrant third-party developer ecosystem, lower the barriers to entry, increase the pace of innovation, and substantially compress development timelines," Paul Eremenko, part of the Project Ara team, wrote in a Motorola blog post.

The idea is for phone buyers to be able to stipulate more of the hardware included in their device when they buy it, and to have the ability to swap out components when they want to upgrade or if anything breaks.

The first module developers kit is expected by the end of this winter, according to Motorola. There's no official word on what modules will be available, but Eremenko said they could include application processors, displays, keyboards, battery, or pulse oximeter, a piece of hardware used to measure the oxygenation of a person's blood.

Motorola will begin recruiting 'Ara scouts' over the next few months to help decide the future direction of the project.

It's been working on the idea for around a year, with help from Phonebloks, a company that's already making a modular phone.

Project Ara follows in the footsteps of the Moto X, launched earlier this year. When Motorola debuted the device, it talked up the phone's hardware customisation options to would-be smartphone buyers , saying the handset could be configured in 2,000 different combinations with different choices of front and back colour, accents, and memory.