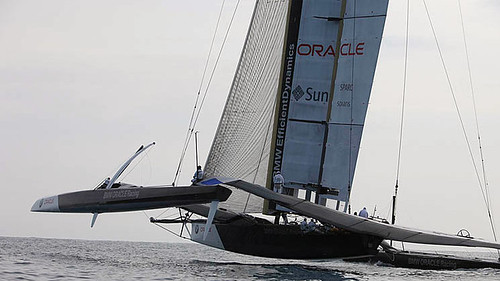 Dennis Howlett wrote an excellent post earlier on the gravity defying, ever increasing flow of maintenance revenue that Oracle continues to report 'thanks to great sales people'.

Dennis suggests in 'How Oracle gets customers to keep paying' that Oracle ‘knows’ what its customers are using thanks to sophisticated application use by seat sniffing software, and can be pretty sure whether the customer is handing over all that it should or otherwise.

It is Oracle’s right to protect its business by any legitimate methods at its disposal. But if that’s at the expense of meeting customers’ real needs at a price at which customers balk then they need a wake up call that reminds them who is filling their coffers.

The 22% and up margins Oracle enjoys enable founder Larry Ellison to compete and win in the America's Cup with a $10 million + gravity defying space ship-like trimaran, "a boat that can squeeze 40 knots out of 20 knots of wind and might yet become the fastest racing yacht ever known".

The analogy is obvious: Oracle can squeeze profits out of a down economy and the customers will live with the success their software brings them despite sharing their profits with their software vendor.

SAP have felt the wrath of their customer's concerns over maintenance costs and addressed them to some extent, and in a down economy this general topic is likely to get a lot murkier: I'm sure Dennis Howlett will produce some more intriguing information as this all plays out. Meanwhile Salesforce (who Oracle have a stake in) just announced their results

While Saleforce is the Goliath of the cloud computing world it is still small David in the global enterprise business world.

This just released SAP video about a California based company called 'Style West' is where everyone wants to be: helping companies that are rapidly growing and blossoming into larger entities.

The reality for the vast majority of enterprise software users however is legacy issues: dealing with older systems and their quirks and glitches, and struggling to stay in business without the latest bells and whistles.

Salesforce have great momentum as the flag carriers for cost effective cloud computing in the enterprise, but they are likely to encounter increasingly stiff head winds as the older generation of vendors starts to offer similar packages and alternatives.

The differentiator will be the informed users who mobilize to get the best bang for their buck.

Join Discussion for: Mysteries of the Oracle...