NEC may be looking to sell off its struggling mobile phone unit to PC maker Lenovo, according to sources speaking to the Reuters news agency.

While Lenovo may be in the front-running to snap up the unit, goes the report, NEC is also looking to others in a bid to raise much needed cash, after nearly two years of consistent quarterly financial losses as well as in market share.

NEC confirmed with a statement through the Tokyo Stock Exchange that "considering a number of ways to bolster the competitiveness of our mobile phone business" amid a rapidly changing and evolving market.

"But nothing has been decided," the firm was keen to stress. It does, however, confirm earlier rumors that NEC was at very least in discussions with other firms. 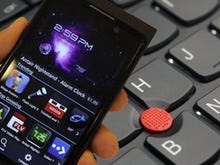 Lenovo, RIM: You two should probably still talk Sit down, have a glass of wine over dinner, and discuss the endless possibilities of a smartphone coalition--or a hardware unit takeover, should RIM finally bite the dust.

There have been prior relationships between NEC and Lenovo. But after entering financial difficulties,  NEC ditched its entire 281.1 million shares in Lenovo to raise short-term cash, generating some $227.7 million at the time. Lenovo, meanwhile, shrugged it off, saying it wouldn't harm its PC or tablet coalition between the two firms.

Also, six months ago NEC cut its mobile phone sales target for the year ending this month down from 5 million units to 4.3 million units. As one of its more lucrative units, NEC will likely see dinged upcoming financial results.

Lenovo already has a smartphone business, but it's far from the global lucrative business that Apple or Samsung have. It does, however, have a Chinese equivalent stake in the mobile market, holding second-place in the region with 11.5 percent of the market as of last October.

That said, the company has no plans to ditch its PC business in favor of taking on the smartphone market. Rumors swirled when Lenovo was reportedly looking at acquiring Canadian smartphone maker BlackBerry , but no deal was made.

In January, Lenovo chief executive Yuanqing Yang said the firm was focused on the "PC plus" age  rather than the "post-PC" era. This confirmed that it will continue to develop its position in the PC market — in which it's coming in at a close second-place behind HP , which holds the top spot by shipments — as well as bolstering its position in the smartphone space.

For NEC, it could be a helpful boost to the company's bottom line as it continues to slowly fall to pieces. It cut 10,000 jobs last year — one-tenth of its workforce — amid a poor economic climate and increasing losses.