BlackBerry could launch a new full- touch smartphone called the A10 by November, adding another high-end BlackBerry 10-powered device to the company's range.

The A10, codenamed Arista, is thought to offer higher specs than both the Z10 and the keyboard-equipped Q10. 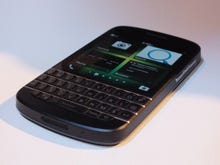 BlackBerry Q10: Hands on with the elusive keyboard-equipped handset BlackBerry has announced its Qwerty-equipped Q10 handset but there were precious few of them in the launch. ZDNet managed to track one down and get a quick hands-on demo.

The US carrier Sprint Nextel, which does not sell the Z10, has already agreed to sell the forthcoming A10, according to ZDNet's sister site CNET. However, the deal is said to be non-exclusive, meaning other operators might also offer it.

The A10 is rumoured to have a 4.65-inch Super AMOLED display and 1.5GHz quad-core Qualcomm processor, according to BlackBerry enthusiast site CrackBerry.

ZDNet has asked BlackBerry for a comment and will update the story when it receives one.

Reports of the new device come as BlackBerry's chief operating officer, Kristian Tear, played up the prospects of BBM on third-party devices.

Tear told CNET that there was interest from other handset makers in carrying BBM as a preloaded app, but he declined to mention names.

The prospect of opening up BBM to other platforms was first announced at the BlackBerry Live conference in May, when the company said it was working on iOS and Android versions of the messaging app .

Despite a tentatively  positive last quarter , BlackBerry sales — even in the UK, where the new Z10 has been available since January — are still well short of where they were a year ago, according to recent figures by Kantar . So, as the company has said previously, devices will be important in the future, but it is also pursuing revenues from services .

Opening up BBM to third-party devices could give BlackBerry a life outside of its own devices and dramatically expand its current 61 million user base, putting in the new class of messaging apps, like WhatsApp, which now boasts more than 200 million users, and Viber, which also claims to have 200 million users.

BlackBerry is also looking to exploit its infrastructure for use in the automotive industry , launching a new service in coming months that will offer vehicle makers OS-independent "over the air" software update and distribution capabilities.

Join Discussion for: New BlackBerry full-touch A10 on the horizon,...