As I explained recently, I decided to "cut the cord" with my cable company , opting instead to consume my video content from over-the-air television and streaming services like Netflix and Hulu+.

Part of the cord cutting process involved an investment in better home wireless networking hardware. While 802.11g and 802.11n Wi-Fi is generally effective for certain types of applications such as web browsing and casual gaming and content consumption on mobile devices, it is not ideal for streaming high-definition video content.

Additionally, the effectiveness of most Wi-Fi capable streaming hardware using built in wireless networking can be negated by the layout of one's home as well as channel interference and especially walls and distance from the core wireless router itself. 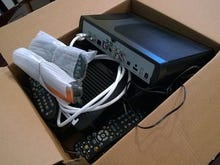 Currently, the fastest Wi-Fi technology is 802.11ac, which is a 5Ghz standard that allows for up to gigabit speeds. Newer routers with multiple antennae and higher power wireless transceivers such as Linksys's WRT1900AC  are able to take advantage of this.

Most wireless streaming devices have 802.11g and 802.11n, typically with one or possibly two antennae, that have a maximum throughput of 140Mbps per second, but in practice a great deal less because speed is highly dependent on signal strength as well as the number of spatial streams supported by the device and the access point it communicates with.

One option is to wire your residence with Category 5 Ethernet cable or Coaxial (MoCA) in home runs straight to the rooms with the streaming devices and to eliminate wireless entirely.

However, for a number of reasons, many people will find it difficult and inconvenient to do that, so they look to devices such as Wi-Fi media bridges to provide a faster wireless connection than their built-in capabilities.

This week Linksys announced the immediate availability of a new wireless range extender product, the RE6500, which retails for $129.00 but sells on Belkin's web site for $99. The RE6500 is one of the few media bridges/range extenders on the market that can actually take advantage of the full speed of a powerful 5Ghz 802.11ac router such as the WRT1900AC.

The RE6500 also has an audio jack for broadcasting streamed music to external speakers connected to the device, such as from your smartphone or tablet.

Netgear has a competing product, the EX6200, which has an additional Ethernet port and a USB port for external hard disks, but it streets at $129 and lacks the audio streaming capability.

Linksys was already shipping a first generation 802.11ac media bridge since 2012, the WUMC710, which is now being sold at a heavy discount for about $42 street.

While the WUMC710 device is effective (I happen to own three of them) it hasn't been updated for a while and the device is a tad bulky and occasionally requires rebooting due to overheating and what I can only describe as first-generation glitchiness. It also has LED lights on the front panel that blinks bright blue, which can be distracting, especially at night when used in a bedroom or when watching a movie if placed near the TV set.

Another key difference is that the WUMC710 does not have the capability to simultaneously act as a wireless repeater, whereas the RE6500 does.

Installation of the RE6500 is simple: After attaching the two antennae, you connect and plug the unit's AC adapter into a wall socket. After the device boots up — which takes about a minute — you connect to its default wireless network using a PC or tablet and use Linksys's web-based wizard to connect to your home's own wireless network being broadcast by your router.

In your router or access point wireless configuration, you will want to make sure that on the 5GHz network, the network mode should be Wireless-AC or Wireless-N only and 40Mhz channel width in order to best take advantage of the RE6500's throughput.

If you don't have any Wireless-G legacy devices on your 2.4 Ghz network, you may also want to consider setting that to Wireless-N only with 40Mhz channel width as well. Keep in mind, however, even some newer devices, such as the iPhone 5S and iPad Air can experience reliability issues with 40Mhz channel width, so you may need to use another access point with a different wireless network SSID to support those devices.

Once that is done, you place the RE6500 it in the room that needs the high-speed connection, and use the device's four (4) Cat-5 Ethernet ports to provide connectivity to your streaming devices.

In my living room, I have my XBOX ONE, my TiVo and my Apple TV connected to the device with Ethernet cables, and I am able to get excellent streaming performance.

Additionally, because of the range extender capability, I'm also able to get superior Wi-Fi reception in the general vicinity of that living room as well as in my bedroom where I have an additional unit installed.

I've been testing the RE6500 for about two weeks, and so far so good. The slim profile of the device makes it easy to conceal, and it has only one warm white light at the top to indicate the device is working, so it won't distract you at night or while watching a movie in your living room.

The reliability and performance of the device so far has been good, and it's been an excellent -- and long awaited -- replacement for the WUMC710.

Do you use media bridges for your wireless streaming applications? Talk Back and Let Me Know.