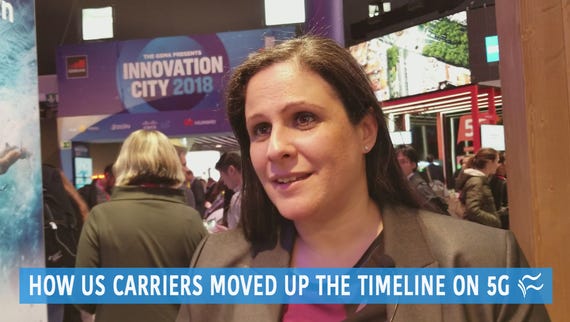 How US carriers moved up the timeline on 5G
Watch Now

Video: How US carriers moved up the timeline on 5G

I was told this was exciting, so I clicked on the link.

You see the site launched today and the URL was simply enticing. Newtmobile.com, it read.

Newt Mobile? What could this be? A new wireless company that was terrestrial and semiaquatic at the same time? This would be breakthrough.

And wouldn't it be great to look at all your friends who are with Verizon and AT&T and smugly sniff: "Huh, so passé. I'm with Newt."?

Already, I could see the launch campaign with Newt Gingrich, renowned space odyssey supporter, telling me that Newt is cute, as well as a brute and it will send AT&T and Verizon down the chute. Politicians employ speechwriters, don't they?

Then I scrolled down on this brand new Newt Mobile website. There was no Gingrich. Instead, it was the double act of T-Mobile's Legere and Sprint's Claure promising more. So much more.

In order to impress the FCC, Newt Mobile says that by bringing together Sprint and T-Mobile, this won't merely be a great company, thrusting its 5G-capable lightsaber at the smug faces of AT&T and Verizon.

No, these two are Captains of America, striving to be Guardians of the Galaxy by creating more jobs and making America the leader in 5G technology.

One can only imagine that, if Rep. Steve King of Iowa casts his eye on the new Newt Mobile website he'll grunt: "Legere and Claure? They don't sound like Americans to me."

Newt Mobile promises: "We will supercharge the pro-consumer, Un-carrier strategy to bring sustainable competition into the marketplace, create new jobs and deliver LTE network benefits starting day one." They add that there will be "huge economic stimulus for America," too.

Lordy, I thought it was only politicians who did the Day One and Huge Economic Stimulus thing. Then again, I suppose this Newt Mobile site is supposed to impress politicians as much as anyone, right?

Wait, but how is having fewer wireless companies going to create more competition? Well, apparently, there's no such thing as the Big 4 wireless companies. There's Comcast and Charter as well. Which, according to Claure, makes it a "Big 7 or 8."

My abacus rattles nervously as I try to make this calculation for myself.

Meanwhile, Legere, the soon-to-maybe-be Chief Executive of Newt Mobile, says that when it comes to 5G, it'll be, oh, just the Big One. Yes, Newt Mobile.

According to Legere, Newt Mobile is "the one company that can build a 5G network America needs in the formative years of 5G."

So they want this merger to be approved in order to create a Newt Mobile monopoly? Political argument is fascinating, isn't it?

Please, though, don't ever underestimate newts.

They can regrow limbs and organs that they've inadvertently misplaced. They secrete toxins that can be deadly. Hey, they've even been on space missions. (That's the frog/lizard cross kind of newt, not the wannabe spaceman politician.)

I wonder if they'll offer free Newt Mobile cases for every phone you buy, with an image of a gorgeous newt emblazoned on them.

It could be the one great style (and political) statement of the next decade.