Eager to move past its days as a handset maker, Nokia wants to build its footprint in Asia-Pacific as a provider of next-generation networks and focus on key verticals such as healthcare and transportation.

Home to 60 percent of the world's population, including Asean where the population was largely familiar with mobility, cloud, and social media, the Asia-Pacific region was undergoing various stages of digital transformation. This offered opportunities in which Nokia could expand its technology footprint in areas such as 4G and 5G, Internet of Things (IoT), artificial intelligence, and digital health, said Sandeep Girotra, Nokia's senior vice president for Asia-Pacific and Japan.

Asked if it could prove challenging to shake off public perception that Nokia was primarily a phone maker, rather than a provider of enterprise networking services, Girotra said it was "proud of the heritage" and acknowledged that its "iconic phones" left "a strong mark".

With HMD Global now the exclusive licensee of Nokia-branded phones, he told ZDNet that Nokia was focused on "driving digital transformation and building next-generation networks" for communications services providers in Asia-Pacific.

He said the 2015 acquisition of Alcatel-Lucent had boosted its portfolio of 5G, IoT, software, and cloud offerings. Last September, it also signed a deal with Singapore operator M1 to deploy a nationwide NB-IoT (narrowband IoT) network, which was slated to be commercially ready by first-half 2017. Its partnership with M1 had included the rollout of the national heterogeneous network (HetNet), which tapped Nokia's small cells and Wi-Fi equipment and was touted to enable devices to switch seamlessly between various types of wireless networks.

In Asia-Pacific including Japan, Nokia was focused on several key verticals including automotive, financial services, healthcare, energy, transportation, and the public sector. In terms of IoT services, for instance, the company had identified transportation and healthcare as key focus areas in which to develop use cases for smart city deployments. The vendor currently was working on models in Japan and Korea that its service provider partners could tap to offer IoT services.

The digital era, though, had brought about disruptions in the telecommunications sector and forced traditional service providers into "a state of transition" amid declines in their traditional revenue streams, Girotra said. He added that Nokia was keen to help facilitate their transformation with networks that supported various connectivity modes.

"Our goal is to connect not only millions of users, but interconnect billions of things to create a global nervous system," he said, noting that the company had built up capabilities in mobile, IP and optical, fixed access, and analytics. All of these, he said, were supported by research efforts led by Nokia Bell Labs and Nokia Technologies, the latter of which was the vendor's patents arm. 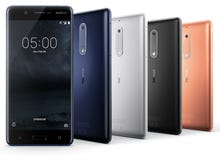 Smartphone licensee HMD is hoping "positive" memories about Nokia in Asia and its strategy to offer stock Android will drive its aim to become the leading player in this market.

Pointing to the company's global strategy to "rebalance for growth", Girotra said Nokia's priorities for the region would be aligned with this vision. It also was focused on software and moving towards an "everything-as-a-service" model, he said.

He further highlighted plans to establish a "sustainable" licensing business through Nokia Technologies, expanding into new areas such as digital health and digital media.

Nokia President and CEO Rajeev Suri last November laid out a new global strategy built on its Alcatel-Lucent acquisition and centred on four key areas, including its ambition to build "a standalone software business with the margin profile of large software companies".

In this aspect, Nokia in February 2017 unveiled plans to acquire Comptel to boost its software portfolio and offerings to service providers. The deal was worth 347 million euros (US$368.39 million).