Nokia has officially kicked off sales of its latest flagship, the Lumia 925, in Germany, while other European markets, China and the US are to follow soon.

Vodafone, O2 and Three in the UK have already released pricing and are taking pre-orders for the Lumia 925, with the first orders expected to be shipped to customers by June 21. 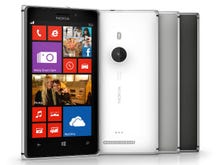 Nokia has announced the newest addition to its Lumia range, the Lumia 925, which the company hopes will resonate with consumers thanks to its camera capabilities.

German carriers are selling the device from today, according to Nokia. Vodafone Germany lists the Lumia 925 for €59.99 a month with a one-off fee of €109.89 on a two-year contract.

Nokia has also unveiled a beta feature it's calling Glance Screen, which displays the clock and battery level when the device is in standby mode. It also allows the device to be unlocked with a double-tap on the screen. The feature will be rolled out to all Windows 8 Lumias once it has moved out of beta.

Three UK is selling the 16GB black Lumia 925 from £35 ($54) a month on a two-year contract and expects to deliver the device by June 21. The carrier is also throwing in a free wireless charging stand and cover.

The Lumia 925 is a 4G device, but until Three rolls out its 4G network later this year, buyers will rely on its WCDMA network. The carrier plans to move customers over to the 4G network at no extra cost when it becomes available.

The 925 is launching against tough competition on specs and price. Samsung's 16GB Galaxy S4 starts at £33 a month on Three and offers a 5-inch screen, 13-megapixel camera and 1.9Ghz quad core processor.

Telefonica-owned O2 began taking orders for a white Lumia 925 on May 30 and its no-upfront cost two-year contract option starts at £37 a month. The carrier is offering a free case, but will charge £49.99 for Nokia's wireless charing plate.

The 925 will also be the first phone Nokia sells with only a Micro-USB cable without the plug under O2's "charger out of the box" environmental initiative.

Vodafone secured an exclusive 32GB version of the Lumia 925 and will sell the device from £34 a month on a two-year deal.

EE, the UK’s 4G network jointly owned by Deutsche Telecom and France Telecom, has not announced plans to sell the device.