Nokia's latest budget Windows Phone 8 device, the Lumia 625, will be available through stores and operators in the UK by the end of the month, the handset maker announced today.

The 4.7-inch display Lumia 625, announced by Nokia last month , enters at the affordable end the market with indicative pricing starting at around £21 per month on contract and £179 on pay as you go, according to Nokia. 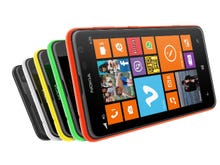 Nokia has announced the latest addition to the Lumia range: the 4.7-inch 625.

The LTE-enabled 625 comes as 4G network competition among mobile operators in the UK heats up with both O2 and Vodafone set to launch their 4G networks this month, joining EE in offering fourth-generation services.

Indeed, all three UK carriers will offer the Lumia 625 along with retailers Carphone Warehouse and Phones4u from 28 August.

The low price and 4G compatibility may provide a lure for Britain's feature phone owners to finally make the move to data-driven smartphones. Market research firm Kantar Worldpanel estimates there were 19 million feature phone owners in the UK in June, with many in this category likely interested in cheaper smartphones such as Apple's iPhone 4 and Nokia's Lumia 520 and 620.

EE is looking to the 625 to draw a "broader audience" to its 4G network. "With the new Lumia 625, Nokia is helping to bring even more affordable, quality 4G devices to the market which will ensure 4G experiences are available to a broader audience," Nicola Shenton, head of devices at EE, said in a statement.

As with its other Lumia phones, Nokia points to the device's camera capabilities, supported by Nokia software and the main rear-facing five-megapixel camera.

While the 625 becomes Nokia's largest screen device, its affordable price is reflected in the specs . The 800 x 480p display is lower than the 1280x768p in Nokia's Lumia 1020, yet to be released in the UK. It also runs on a 1.2GHz Snapdragon processor, has 512MB of RAM and 8GB onboard storage. For Nokia fans that keep track of its latest sofwtare updates, the 625 also comes with Nokia's latest Amber update, which offers a new 'incoming caller' and SMS filter feature .

For a limited time customers that purchase a white or black Lumia 625 will also get a free coloured shell in orange, yellow or green.

Vodafone is launching its 4G services on 29 August and today announced availablity and pricing for the 4G 4.3-inch HTC One Mini. Vodafone is offering the device for free on a £34 per month '4G-ready' plan that that offers 2GB of data per month.