With Nokia in the process of dividing in two, the piece of the company that's not going to Microsoft hasn't been resting on its laurels. 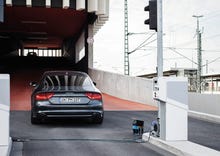 Audi's self-parking car: What's stopping the tech getting on our roads?

Audi recently demonstrated a car that can park itself without the need for a driver. But while the technology already exists to make autonomous cars a reality, it will be a long time before our vehicles will take over the driving.

Nokia's mapping business, Here — one of the three units that won't be sold to Microsoft under the €5.4bn deal announced last week — has revealed it's getting into self-driving cars.

Nokia has teamed up with Mercedes-Benz to work on the so-called 'autonomous vehicles', with Here providing 3D maps for the Mannheim to Pforzheim route in Germany for connected cars, with a view to developing them for future use by self-driving cars.

"The requirements put on maps by autonomous driving go beyond what has been available until now. The very exact precision of lane width, road sign locations and other road network attributes are all crucial components needed to provide routing for autonomous vehicles," Nokia wrote on its Conversations blog on Tuesday.

Among the elements that maps for self-driving cars need are the number of lanes, location of signs and the positioning of traffic lights, it said.

While Nokia acknowledges that self-driving cars won't hit the roads for "several years", the companies are thinking "about the infrastructure and technological requirements needed to support this technology. Mercedes-Benz and Here will continue to explore this area together", Nokia said in a statement.

Nokia and Mercedes Benz aren't the only companies with an eye on self-driving cars: German automaker Daimler told Bloomberg at the Frankfurt motor show that it's looking to launch an autonomous vehicle by 2020, while German paper Frankfurter Allgemeine Wirtschaft reported last month that Continental was close to agreeing deals with Google and IBM for a similar project. Audi has also previously demonstrated cars that can park themselves .

Nokia announced Continental as one of its new customers for Here Auto, the in-car navigation system it unveiled last week .

Join Discussion for: Nokia teams up with Mercedes-Benz for self-driving...