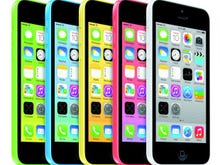 iPhone 5c, 5s: Where's the cheapest place to get them in the UK? UPDATED: With separate pricing for 3G and 4G data, iPhone 5c and 5s buyers will have to sift through a lot of information to find which deal suits them best.

Customers with iPhone 5c and 5s smartphones on O2's network can now get faster mobile data speeds after an update was released over the weekend to bring LTE support for the two devices.

The carrier update brings Telefonica-owned O2 up to speed with its LTE rivals EE and Vodafone, who have had LTE support for the 5c and 5s since launch.

O2 began selling Apple's latest generation of iPhones on 20 September without support for its 4G LTE network , which was launched in late August . At the time, O2 said it expected to resolve the issue within a few weeks and offered customers a £5 discount on their first month's bill. (Its 4G plans are £5 higher across the board than 3G plans with equivalent data allowances.)

The operator's 4G network initially launched in London, Leeds, and Bradford, with Birmingham, Coventry, Leicester, Nottingham, and Sheffield added in August. O2 plans to cover 13 cities by the end of the year.

Apple sold nine million iPhone 5s and 5c devices over the first weekend of sales across the world, which may have been higher if supplies of the 5s variant were more abundant.

Carriers in the UK complained at the launch that 5s stocks were "severely limited" , which appears to have been an issue common to all early launch markets, including the US.