By Natalie Gagliordi for Between the Lines | July 7, 2014 | Topic: Open Source 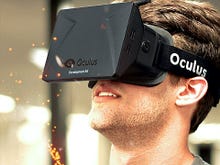 First up, the Facebook-owned company said it acquired the networking middleware systems provider RakNet and will open source its C++ class library. RakNet's technology has earned popularity among both indie developers (Oculus included) and mainstream companies like Mojang and Sony Online Entertainment, in large part due to its ability to operate across a wide variety of network types.

Oculus said the open source is available immediately under a modified BSD license, the same license used by Facebook for its open source projects, from the Oculus GitHub repo.

The purchase represents Oculus' mission to remain relatively autonomous following its own controversial acquisition by the social network earlier this year, and follows the June acquisition of the Seattle-based product development and consultancy firm Carbon Design Group. Financial details for both deals were not disclosed.

Oculus said space is limited for developer-centric event, but the lucky group that makes it in will receive hands-on design and engineering feedback for Oculus apps in development.

By Natalie Gagliordi for Between the Lines | July 7, 2014 | Topic: Open Source