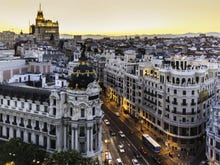 Spain to get first 4G mobile network in July Yoigo, Spain's smallest mobile operator, looks likely to beat its bigger rivals to the punch by launching LTE networks this summer.

Just days after Yoigo announced it was to become the first Spanish mobile operator to offer 4G services, rival Orange has gazumped it with an announcement of its own. It will launch its 4G network on 8 July, just days before Yoigo's service goes live.

Orange, Spain's third biggest mobile operator, will launch its 4G services simultaneously in six of the country’s largest cities: Madrid, Barcelona, Valencia, Seville, Malaga and Murcia. A further nine cities — Bilbao, Zaragoza, Alicante, Cordoba, La Coruña, Valladolid and Vigo on the mainland, Palma de Mallorca in the Balearic Islands and Las Palmas in the Canary Islands — will be live by the end of 2013.

All provincial capitals will be connected by the end of 2014, Orange added.

Orange is yet to announce pricing for its 4G services so it not known if the company will match Yoigo's offer to upgrade current 3G customers to 4G free of charge.

This announcements means that Spain’s third and fourth largest mobile operators have got the jump on their bigger rivals, Vodafone and Telefonica-owned Movistar. Neither has confirmed when they will launch 4G networks.

La Moncloa, the Spanish prime minister's official website, said the Yoigo and Orange announcements are a result of efforts by the current government to boost Spain's troubled economy by improving its digital infrastructure.

The Digital Agenda for Spain, a strategy for the country's online future adopted earlier this year, and a revamping of the General Telecommunications Act to help promote collaboration in the market have helped bring forward 4G adoption, which was originally scheduled to take place in 2015.

The site added that 4G connectivity could add €12bn to Spain's economy over the "coming years", which equates to around one percent of GDP. That's not too different from the figures suggested for the UK, where 4G cheerleader EE has predicted 4G could add 0.5 percent to GDP.