There were a couple of comments posted to my previous write-up of PCLinuxOS KDE 2011.6 which said that the LXDE version was already available. In fact I had noticed the ISO files for it when I downloaded the KDE distribution, but since it had not been "announced" on the PCLinuxOS Web Page I decided not to write about it at that time. Those comments pointed me to the Release Announcement for the LXDE version, so I have now downloaded it and installed on a couple of netbooks. Here are my first impressions.

I will start by saying that pretty much everything that I wrote about PCLinuxOS KDE 2011.6 applies to this LXDE version as well. Download (from the same mirrors), convert and installation are all the same. When you reboot after completing the installation, you will get this LXDE desktop (screenshot from my HP 2133 Mini-Note, 1024x600 resolution): 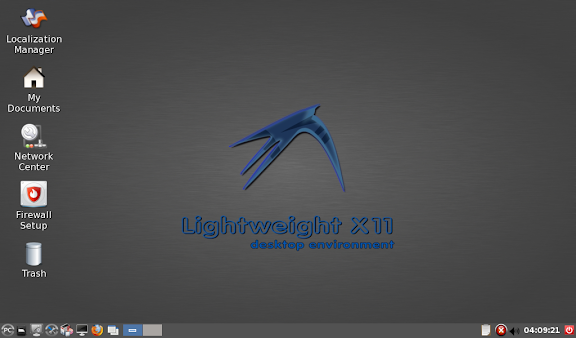 In fact, if you pay attention while rebooting you will get the first hint about what the major advantage of the LXDE version over the KDE version. They both take about 30 seconds from power-on until the login screen appears, but while KDE takes about another 30 seconds from login to a desktop ready to use, LXDE takes about 10 seconds. That makes sense - the process of booting the system and loading the Linux kernel is pretty much the same no matter what desktop you're going to run, but once the kernel is up and running the process of going from login to ready desktop is almost entirely involved with getting the desktop manager running and configured.

I have specifically loaded this LXDE distribution first on the two systems which I think will be most likely to use and benefit from it - my trusty HP 2133, and the much newer Lenovo S10-3s. I chose these because they are both a bit "difficult" in certain ways. The 2133 is well known for its Via C7-M cpu, Chrome9 display controller and Broadcom 4311 WiFi controller; the S10 for its Synaptics "ClickPad" touchpad and Broadcom 4313 WiFi controller.

What I found was actually a result of the general situation with PCLinuxOS LXDE. Under the covers of the desktop user interface, this distribution is the same as the "standard" KDE distribution - in this case, the same Linux kernel and drivers. So all of these things worked on the LXDE distribution, just as they had on the KDE distribution. I had to make the same minor adjustments, getting rid of the xorg.conf file (it was correct on the S10, wrong on the 2133), blacklisting the "wl" driver on the S10 (but using it on the 2133). I did notice one thing that I had not seen on the KDE installation, but I might just have not looked for it yet. When I booted the 2133 I got the feeling that the cpu was running at full speed all the time. I added the cpufreq front-end to the panel, and sure enough it was configured for performance and was running at 1.6 GHz constantly. That's not a great idea for any netbook, and particularly not for the 2133. No big deal, I just used cpufreq-seq -g powersave to change the profile, and the cpu immediately droppped to 800 MHz. Problem solved - I'll have to go back and check this on the KDE installation as well.

My overall impression of PCLinuxOS LXDe is very positive. I know that its major advantage is supposed to be that it is a "lightweight" distribution, and I will probably use it on the 2133 for exactly that reason. In fact, it is going to be interesting to compare this distribution to Linux Mint (Debian) Xfce on the 2133, and see which I like better. But beyond that, I think this is a very good general purpose distribution. A lot of people are looking around for alternatives to the "new wave" of desktops (Gnome 3, Unity, KDE 4), and this could be a very interesting alternative to them. It has a good selection of software, some of it is the standard stuff like Firefox 5, eVince, Brasero and even the Clementine music player. It has the same LibreOffice manager/installer as PCLinuxOS KDE, so you can have that if you want it but you aren't stuck with it by default. It also has its own array of small, fast but still very useful and powerful utilities, such as the Leafpad editor, PCManFM file manager, Screenie for taking screen shots, and lots of "LX......" configuration utilities. It does not have the degree of "eye candy" in the interface that the larger desktop systems have - no 3D effects, for example - but a lot of people would consider that to be an advantage.

Finally, I will make one other direct comparison. Those who have read some of my previous postings will know that I am a major fan of Linux Mint. I have recently been trying the Release Candidate of the upcoming Mint 11 LXDE distribution. My personal opinion is that the PCLinuxOS LXDE distribution is considerably better than Mint 11 LXDE. I think it looks better (more polished), and I like the selection of utilities and applications quite a bit better. I don't have a lot of concrete evidence to base this on, it is really just a "gut feeling" kind of thing. Other people are likely to feel differently, and I can easily imagine situations where the functionality, device support or some other "real world" consideration would override this feeling. They are both worth a try, in any case.