I grew up on a small island. It was a quiet place, full of bankers and farmers all watching their crops grow: potatoes in the spring, tourists in the summer, pound notes all year round. All-in-all, nothing really changed. The tides washed in, the beaches shone in the sun, and every now and then you'd hear the boom of a foghorn.

But those clear blue summer skies above that island were a wonder. High above the clouds you could watch one of the great crossroads of the air lanes, as aircraft came down the Channel and turned across mainland Europe. But what left those contrails? Who was inside those silver dots? There was no way of knowing. I'd lie on the grass in that summer garden, watching the planes, imaging just where they were going.

That was before smartphones, and before the internet. Now, thanks to a confluence of technologies I'd have about a 50:50 chance of knowing not only what the plane was, but where had come from, where it was going, and just what route it had taken. I wouldn't have to be listening in to air traffic controllers on a VHF radio; instead all I'd need was a web site or a smartphone app.

The secret is ADS-B, the Automatic Dependent Surveillance-Broadcast. Part of the infrastructure needed for the next-generation of air traffic control, ADS-B is a mix of technologies – a high-integrity GPS system, and a radio transponder. Real-time position data is transmitted every second, with the intent of giving pilots a real-time view of the airspace around their plane. That information can be picked up by any ground-based ADS-B receiver, and shared over the internet using services like Flightradar 24 or Plane Finder. 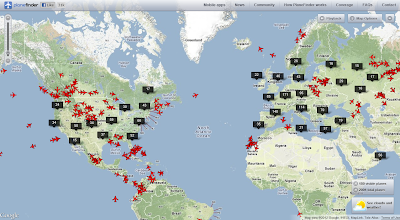 Planes all over the world...

Currently around 60% of aircraft in Europe have ADS-B systems (30% of the US), and networks of receivers take that data and plot it using familiar map APIs. Additional information, from various web sites and services gives more context – detailing the aircraft, the route it’s taking, and even bringing in reviews of the flight and route. It’s all the information you'd want, and a little more beside… 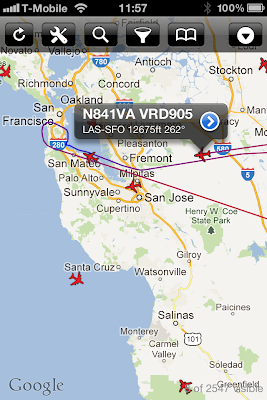 Tracking a plane, from a phone

What’s perhaps the most fascinating thing about these services is that much of the information is provided by volunteers, who set up VHF antennae and receivers, decoding transmissions on their PCs, and then uploading them to the various services. With aircraft so high (typically 30,000 feet or more), VHF has a range of several hundred miles – so the number of receivers needed is relatively small (Flightradar 24 has a network of 500 or so receivers for its service).

The software the various services are using keep getting better – as does coverage, with Plane Finder's network now covering flights well into the Atlantic and across Canada. The resulting tools are that perfect blend of hardware and software, taking the physical into the virtual and sharing it with the world. It's perhaps not surprising then that the latest generation of ADS-B viewers have added augmented reality tools – so you can now lie in your garden, see a plane high overhead, point a smartphone at it and see what it is and where it is going. 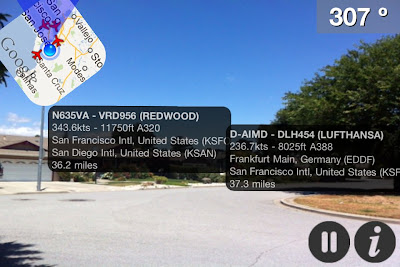 Sometimes it all makes you want to be a child again, just to express how wonderful it all is.