A Berlin developer has launched the VoltaStream Zero, a hand-crafted and open-source integrated audio module in the same form as a Raspberry Pi Zero. 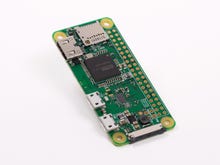 The other is the small scale of the VoltaStream Zero production, currently being made in batches of up to 100.

The audio board has an interesting story, though. It's the outcome of PolyVection founder Philip Voigt's four-year quest to perfect an earlier model cobbled together with a Raspberry Pi and attached DAC.

The final result has comparable features to Chromecast audio but in a module that's completely open source and delivered by a "one-man show".

Even the physical design of the board is open source, based on CERN's KiCAD PCB designs. The hardware files are available on PolyVection's GitHub page.

Voigt founded PolyVection in 2013 to start work on the integrated audio board, which he alone designs and manufactures today. He sources core components from NXP and TI, but otherwise manufactures the board himself with his own pick-in-place machine, stencil printer, and reflow oven.

He also has a laser cutter to carve the board's stylish wooden case, and maintains its Linux kernel, drivers and the three compatible operating systems: PolyOS, PolyBian, Volumio.

"I think I'm currently the only one producing a commercial but open-source Linux board in a one-man show," Voigt told ZDNet.

Explaining the high price, Voigt points out that its SoC, NXP's i.MX6ULL ARM Cortex-A7 996MHz processor, alone costs as much as the whole Raspberry Pi Zero. He chose the SoC for excellent vendor support, solid documentation and low energy consumption.

"Then, of course that DAC is expensive as well as the combined 3.5mm TRS jack that offers access to either analog line output or optical TOSLINK audio. Also, the PCB is populated on both sides which means a doubled production time compared with Raspberry Pi Zero," he said.

"Last but not least, I'm sourcing the components in quantities of 100, not 100,000 or even millions like manufacturers of other boards."

While small volumes add to costs, Voigt reckons he can ramp up production faster than if he outsourced assembly, which is fortunate because only five units are currently available.

Voigt has enough components to turn out 100 more boards.

"I just have to hit the start-button to ramp up stock again. Even if I would run completely out of stock, new components will take less than 14 days to arrive," he said.

He's also offering a custom builds for orders of more than 30 units.

The VoltaStream Zero is available with DDR3 512MB or 1GB of RAM, and two variants of TI's DACs. It also features a full-size USB Type A connector, a microUSB port, and 28 GPIOs.