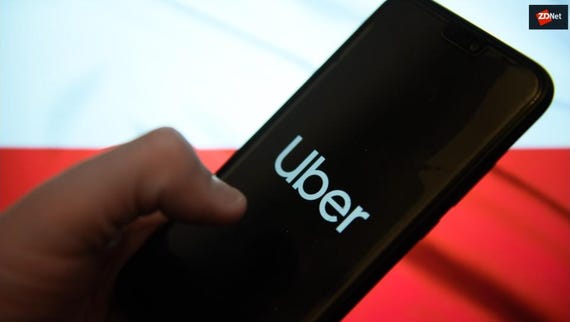 Inside the recent Mobile World Congress, shiny transport technology was everywhere, from connected and autonomous cars, to 5G ambulances.

But outside the venue, the reality was a little less glossy. On the streets of Barcelona, MWC19 attendees were having to deal with a metro strike, traffic jams, transportation tickets errors, and a protest by Uber and Cabify drivers.

Both companies had abandoned the city earlier in February, after several weeks of conflict with traditional taxi drivers that resulted in a decree from the Catalan government requiring ride-hailing vehicles to be hired 15 minutes in advance and banning cars from being geolocated and moving around the city seeking customers.

Cabify now says it will again operate in Barcelona "having adapted its model to the restrictions imposed by the Catalan government", returning with a 300-vehicle fleet "in an initial phase".

But according to Unauto, an association of professional drivers with passenger transport vehicle (VTC) licenses that cover ride-hailing services, there are around 15,000 VTC holders in Spain, with about 3,000 in Catalonia before the decree was approved.

One of the drivers of the 10,500 conventional taxis circulating in the city, Felipe Ausin, says VTCs have always been there. But he reckons that the Spanish law that establishes a ratio of one VTC for 30 taxis has not been respected in allowing Uber and Cabify cars to operate.

What rankles with drivers like him is that a taxi license costs as much as buying a house: €120,000 or $136,000. That investment takes time to recover, hence the hostility to drivers from Uber and Cabify who don't have to pay that premium.

José Yañez, a 54-year-old taxi driver, with 33 years' experience, considers that "drivers with a VTC license occupy a space that's not theirs because they provide the same service as a taxi without paying the same license".

He also stresses that self-employed drivers like him cannot compete with big companies like Uber or Cabify, so he is happy with the new decree.

Uber's Spanish spokesman, Yuri Fernández, argues that the obligation to wait 15 minutes to travel in a VTC does not exist anywhere else in Europe and is totally incompatible with the immediacy of on-demand services, such as UberX.

"The future of mobility is being able to choose," he says, and is key to developing a sustainable mobility strategy with fewer vehicles circulating in the streets.

To achieve that, all the stakeholders need to work together, Fernández argues. "Uber and the taxi sector working together? It may sound weird, but it's not. We already do it in several cities around the world, and we want to do it in Spain."

In Madrid, the ordinance that seeks to regulate the activity of ride-hailing services in the city is still being discussed. The proposal that most worries Uber and Cabify drivers is a limitation on the kilometers they can do without a passenger in the vehicle.

They argue it would be unfair to apply such restrictions to them when issued by Madrid City Council shows that a conventional taxi travels about 208km a day in the city, 113.6km of them without any rider (129 miles and 70.6 miles).

Meanwhile, millennials and generation Z users don't understand why their cheap options are being limited. Laura and Inès, 18 and 24 years old respectively, both students in Barcelona and users of Uber and Cabify, were devastated when both companies quit the city.

They know that the conventional taxi sector has also developed applications to order vehicles through their phones, but they still prefer the sharing-economy alternatives.

"The vehicles are cleaner, and they take you where you want to go without unnecessary detours," says Inès, who is doing a masters in international law.

In the end, protests from both sides are probably futile, given what was going on inside the MWC19 venue. Technology change is unstoppable and also opens up new possibilities, such as cooperative ride-sharing apps based on blockchain or non-profit rideshare.

Whatever future technology promises, taxi driver José Yañez just wants to keep driving his car: "You know, I don't think the autonomous car will take over the streets tomorrow."

The company has asked for cooperation from Australian governments so it can demo Uber Air in the country as early as next year.

A class action against Uber raised in Victoria will be opened up to another three states, which could make it one of the largest class actions in Australian history.

The hacker responsible was paid off to keep quiet.

Legal wheels may now be in motion as Uber is granted an extended license to work in the capital.

Autonomous cars as a service: How Panasonic is preparing for a future where most drivers don't own cars TechRepublic

Panasonic is preparing for a future where autonomous cars upend the auto industry and most cars are sold to ride-sharing companies like Uber or Lyft.

After a judge rejected an earlier offer, the ride-hailing company tries again. Its goal is to ensure drivers remain independent contractors, not employees.

Join Discussion for: Ride-hailing wars: Why Uber, Cabify are facing...