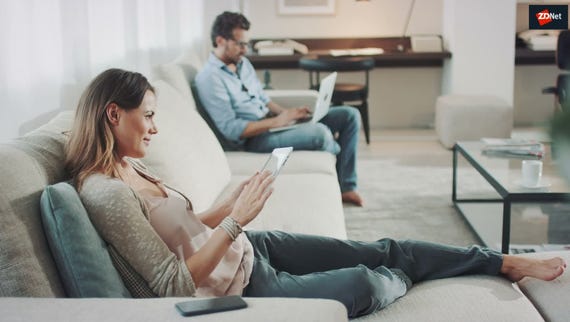 One of the big robotics storylines of 2018, at least in the mainstream press, was the arrival of multiple sex robots on the market. Most of these take a female form, anthropomorphic fantasies like Synthea Amatus's Samantha and RealBotix's Harmony, which have raised eyebrows and prompted international coverage, spurred in no small part by boisterous founders and burgeoning rivalries.

Also: It's complicated: Love in the age of apps CNET

Robot brothels, meanwhile, have popped up in Toronto and Paris, and another was barred from doing business in Houston. Pontificators have pontificated about whether this is a good thing or a sign of a society on the skids, and much of the criticism has (rightly, in my opinion) focused on how these robots represent women, both in appearance and as passive objects of desire. Almost like clockwork, "male" robots with bionic penises are now on their way.

The current spate of sex robots are just that, devices for fantasy-fullfilment and physical pleasure, and the technology, frankly, isn't that much more compelling than non-robotic sex dolls. But a day is no doubt coming when a robot will leap across the Uncanny Valley and pass muster as a thinking and thoughtful companion. We often use words like "love" and "obsessed" to describe our connection with gadgets, but from a human standpoint is it even possible to love a machine the same way we can love another person?

A body of literature on the subject is emerging from the fields of behavioral science and human-robot interaction. A book by David Levy called Love and Sex with Robots deeply and convincingly explores the subject. In 2015, Elizabeth Phillips, Ph.D., now assistant professor in the Department of Behavioral Sciences and Leadership and in the Warfighter Effectiveness Research Center (WERC) at the U.S. Air Force Academy, gave a talk on robot intimacy at Orlando Nerd Nite and The Smithsonian's Future is Here Festival in Washington, D.C. that drew in part on Levy's book and remains the smartest concise exploration of the subject I've heard.

Also: Watch Will Smith try to romance Sophia the robot, and fail CNET

Professor Phillips argues there will be an inevitable leap to love and sex with robots, but to understand why, we have to understand how humans form relationships with people and how they fall in love. This is the realm of Attachment theory, first conceived to describe the relationship between infants and at least one primary caregiver. The theory holds that there's an evolutionary advantage for human infants to attach to a caregiver early in life for comfort and security. Notably, attachment does not have to be reciprocal, though it can be.

Ten reasons we fall in love

The theory extends to adult relationships, which is born out by the observation that infants who don't attach to a caregiver early have a difficult time forming interpersonal relationships later in life. But that doesn't fully explain the mechanisms of love, the how and the why people actually fall in love with another person. That subject is the realm of a large body of social psychology research, and the general consensus is that there are 10 primary reasons people fall in love. (Dr. Phillips points out this is often represented as 10 + 1, since all of the reasons we fall in love are predicated on physical proximity to another person.)

The ten reasons include things like similarity, exclusiveness, filling needs, and arousal (for a complete list, check out this article). The question Phillips proposes is: Can robots fill the 10 + 1 reasons for humans?

There's a preponderance of reasons to believe the answer is resoundingly yes. First, there are certain times in life when attachment to people moves to attachment to items. These so-called security attachments will be familiar to parents; my kid has two (!) blankets he takes everywhere. But security attachments go beyond the Linus syndrome and extend into adulthood. Computers in particular are excellent at serving as attachment figures. They're portable, accessible, aid our exploration of the world, and offer comfort in the form of connections. These coincide with reasons people fall in love with other people.

Don't buy it? Consider your smartphone. Now consider a day without your smartphone after it's been lost. Many people would feel naked, vulnerable, oddly isolated. In a word, lonely.

There's also the increasing "realness" of robots to consider. Phillips points out we may be coming out of the Uncanny Valley as robotics designers make increasingly lifelike robots that feel less creepy than human simulacrums of just a couple years ago. That means robots are becoming increasingly convincing as they pass for human.

Couple that with the fact that people are already demonstrating a preference for artificial relationships. Phillips cites a Japanese craze among the Otaku subculture of playing dating video games in which players establish relationships with computer characters. It sounds weird, but given what we know about Attachment theory it's not all that different from the Tomagotchi craze that's more familiar here in the U.S. (There's even a so-called Tomagotchi effect to describe human attachment to a machine.)

Social acceptability is one of the 10 + 1 reasons people fall in love, and there, too, there's a good case that robot affection is in the offing. In the U.S., polling suggests changing views of sexuality and greater permissiveness of sexual relationships that fall outside a narrow heterosexual norm. When talking about relationships with robots, reactions are often reflexive and negative, but there's good reason to suspect that's going to change.

The missing piece of all this is emotional intelligence, some sense that there's an understanding 'other' out there who gets us and reciprocates our feelings. The big question is whether we'll ever accept that robots, which we know to be artificial, can offer that comfort.

But we're not as demanding or filial to strict notions of reality as we may want to think. Phillips points out that when researchers ask people who visit brothels why they go and what they get out of it, one oft-cited reason is a sense of reciprocated connection from another person. It's not that the people going to brothels believe, intellectually, that the sex worker they're visiting is infatuated with them; it's that it doesn't really matter so long as the fantasy is plausibly maintained. We have emotional buttons, and even in a transparent transaction scenario they're easily pushed.

Also: Anki's delightful little robot is a step in the right direction

Computers, of course, are becoming much more emotionally intelligent and have adopted all kinds of strategies to push our emotional buttons. Home assistants are able to respond to us with quirks of simulated personality and even make us chuckle with unexpected jokes or insights. More sophisticated machines like Sophia have caused a stir for giving lifelike live performances that seem to exhibit improvisation and personality.

Taken together, all of this points to a clear conclusion: We may be much closer to seeing human-robot affection than we realize.

Join Discussion for: Robot Love: Why romance with machines is...