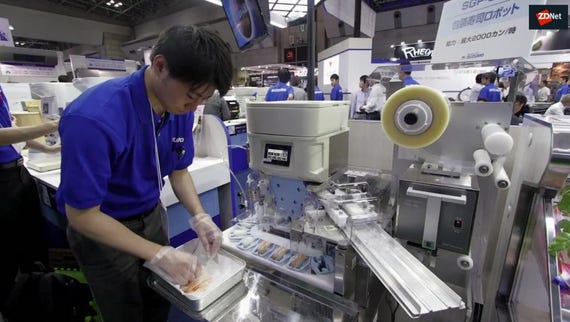 The Robotic Industries Association (RIA), which is North America's leading robotics trade group, just announced the signing of an alliance partnership with the Occupational Safety and Health Administration (OSHA), the Department of Labor agency tasked with ensuring safe and healthy working conditions in the US.

The partnership comes as robots begin making their way into new work environments, such as light manufacturing, logistics and fulfillment centers, and agriculture.

Yesterday I wrote about a company using pizza-making robots to churn out reliably perfect pies.

Fortunately, the statistics on robot-related accidents are encouraging.

Broadly speaking, two categories of robot are entering the workforce: professional service robots and collaborative robots. The former are the hulking behemoths that have been around since the early 1960s, when General Motors installed the first industrial robot in one of its plants in New Jersey. They interact with humans unidirectionally--an operate gives an input, the robot follows the command.

Collaborative robots, by contrast, are designed to work in the same space as humans, performing rote tasks and also responding on the fly to what's going on around them.

A search of OSHA's incident reports reveals that since 1984 there have been 38 robot-related accidents. All of those involve professional service robots, which typically operate behind cages. Many of the accidents occurred during maintenance, when workers sometimes have to power up the units to test and trouble shoot.

Of the 38 incidents, 27 resulted in a worker's death. For comparison, in 2013, when the last US worker was killed in a robot-involved accident, there were 4,585 workplace fatalities in the US overall, according to the Bureau of Labor.

More recently, robot-involved worker deaths in India and Germany have revived concerns about robots on the workforce.

But both of those deaths, while tragic and certainly preventable, involved large robots used to build cars. I haven't heard of any serious injuries involving collaborative robots.

Of course no technology can be made foolproof, and OSHA will be taking safety standards in environments where humans and robots work together seriously. So will the engineers designing these robots.

Because they can't rely on cages and isolation as a safety measure, collaborative robots use proximity and force sensors, as well as 3D cameras and LiDAR to safely interact with humans.

Many of the robots have hard-wired brakes and fail safes, reducing the risk they'll be hijacked over a network.

And in general these collaborative robots have lightweight manipulator arms and end effectors, which reduce the risk of serious injury in the event of contact.

"RIA has a long history of helping to keep around industrial robotics," says Jeff Burnstein, the organization's president. "We developed the first American national robot safety standard in 1986 and we've kept it up-to-date since then."

Burnstein adds, "This new alliance with OSHA and NIOSH [the National Institute for Occupational Safety and Health] will help us to continue advancing worker safety as more robots enter the workplace."

And they will. In a recent survey by IT service management company Genfour, 94 percent of businesses in the UK and US said they either embraced robots or felt a robotic future is inevitable.

Join Discussion for: Robots are coming to work. Are they safe?