Have you ever been to an internet culture conference? Earlier this year, Harvard senior Tim Hwang threw one in Cambridge, Mass., and it was a massive success.

This time, Hwang wanted to have a smaller get together in San Francisco to chat about memes. Welcome to ROFLthing 2008. 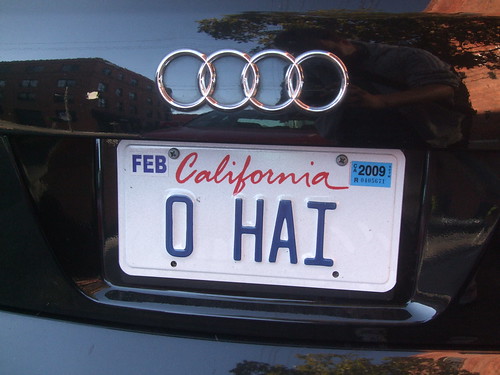 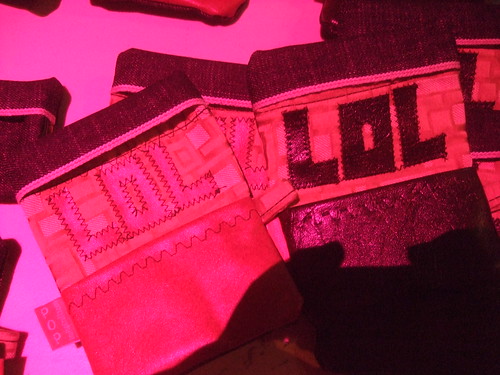 6:21 p.m. We arrived a little late. Portland programmer and founder of Upcoming.org Andy Baio introduced ROFLthing by showing the most hilarious bloopers that are found on the web.

Have you seen the DEA officer who was showing a class of people how to be safe with a gun and shot it by accident? 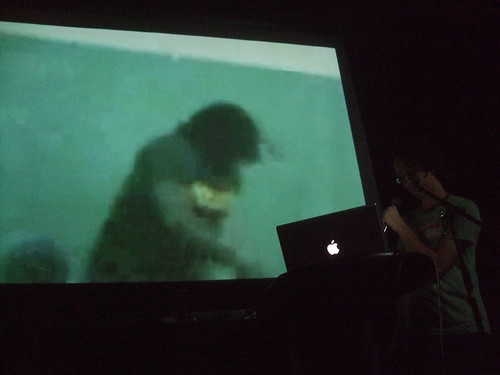 As long as it's convincing, a meme will spread. 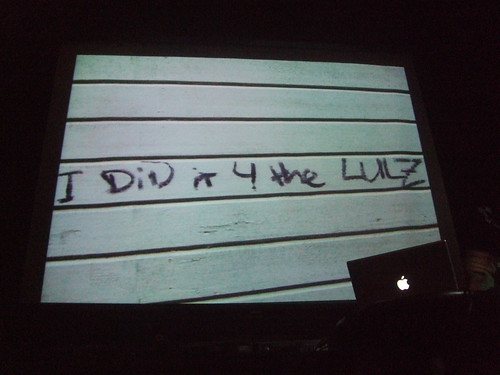 It has to have the air of authenticity, but not forever. Just long enough for it to spread it to your friends.

Is it okay to ruin someone's life, as long as it's entertaning?

If there's nothing you can to stop it, you might as well profit from it. 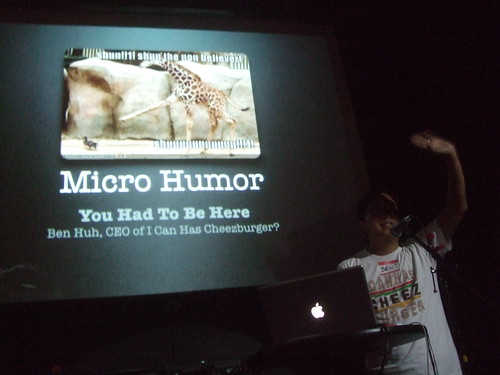 If something has a mass audience and consensus, it has stardom. The part that's rarely exploited is called micro humor. 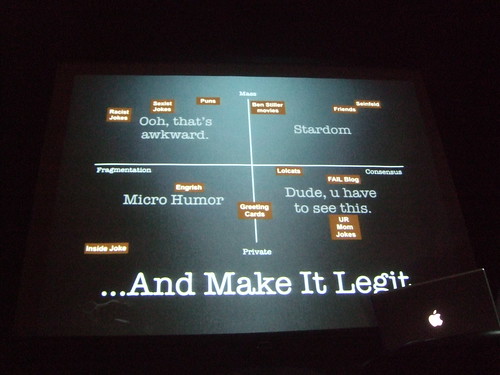 Inside jokes are the microest of humor. It's something that we laugh at every day. Puns carry an entire area on the spectrum. 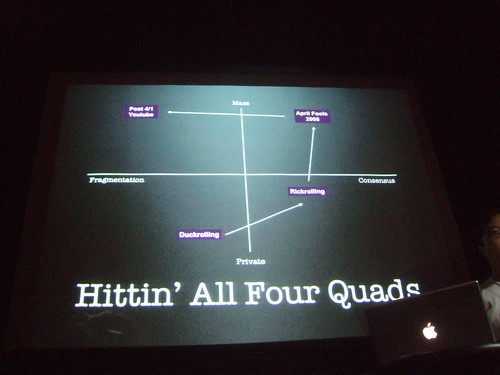 The Rickroll has moved through all quadrants. As a meme, it has this amazing huge lifespan that we've all witnessed. 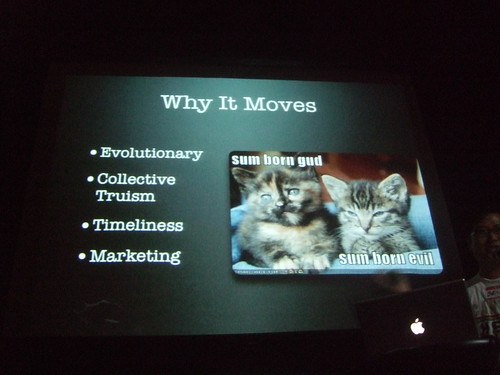 If you look at the Google Trends analysis for Rickrolling, you can see it jump through the stages. You notice that when April 1st came around, the whole world knew about it. Then it severely dies off and becomes passé. 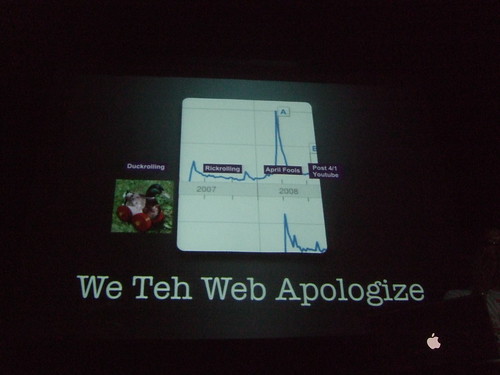 But what is micro humor?

Micro humor is not Web 2.x. It's not new, or the root of all humor, just something we inherently know as funny.

The first time you were in your mom and dad's arms and they poked you in the nose, that was your first moment of micro humor.

It's the little things that we share with each other, and when you go home you watch broadcast TV and zombie out. 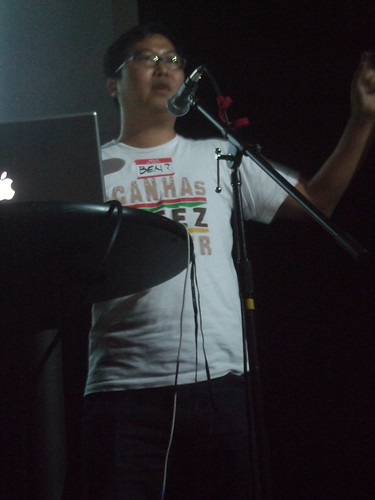 Before mass media, micro humor was the dominant force. Imagine a king in a castle with his jesters. It had to be about the situation, or the people in that room.

In the "inner tube" era, because of the ease of publishing, we can move micro humor into other quadrants. The social web gives us a feedback loop. Right now, this growing meme industry is small, but growing. Chuck Norris is now mainstream.

Here are the slides from Ben's show » 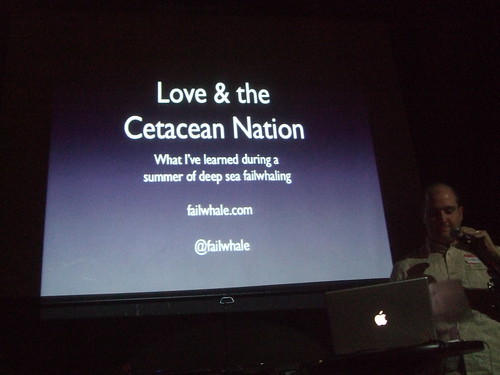 What makes the failwhale interesting to us? It makes a really good example of what server overload is. How do you explain that to mom? Use the traffic metaphor.

What makes it so sticky on a social media standpoint. Why do we like the failwhale?

5/30/08 - Robert Scoble mentions the word "failwhale" in a video. This was the day I registered the domain name. I say on it for a few weeks. In mid June, it was starting to gain momentum. 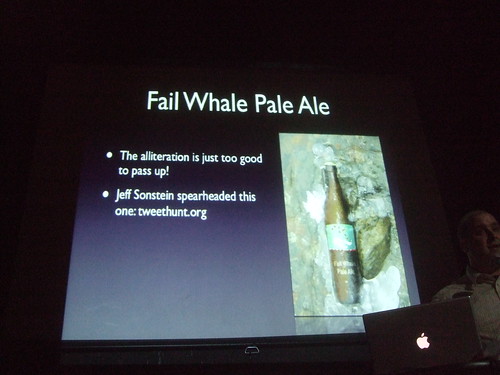 6/23/08 - A box of shirts arrives at Twitter headquarters. This is just a way of showing those guys about this problem, and that it's up front and center. Convinced Twittter would dump the whale and move on.

There was a FAIL party about a month ago. There has been coverage on NPR, CNN Money, and Wired. 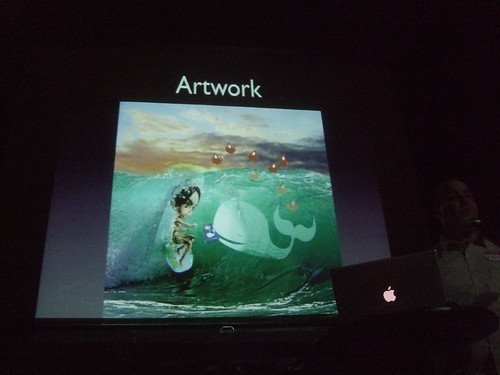 Buckminister Fuller and the Technoratic Counterculture 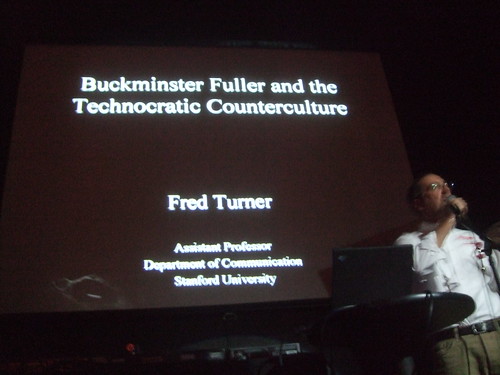 The children of the 1960s were caught between nuclear holocause and the consumer cornucopia. Large scale industries that built things that could possibly blow up the world were competing with other industries that made fun things, and kids were trying to figure out which was right. 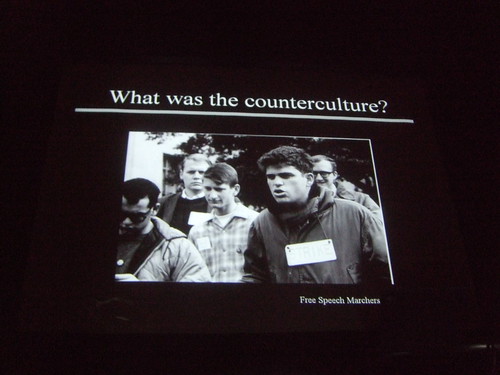 Buckminister Fuller had a notion of comprehensive design. They harvested the potentials of the realm. You should not work for a large institution, you should freelance. Look around, survey the information scape. Redistribute the goods of the world that would build more egalitarian communities. This appealed to the counterculture because it was seen as an anti-war activity.

Comprehensive design is our hope for technologically-enabled communities of consciousness. This legacy is beautiful and risky. A community that's "just for us" is not okay. 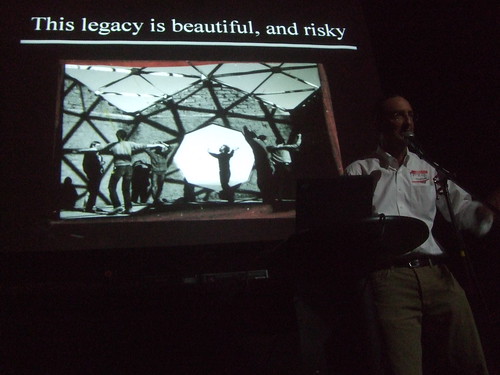 Online worlds are described "as if they were alternative worlds". There is a fantasy of living. Lurking in online worlds connects back to offline worlds, and that's where the thinking of the future has to happen.

7:25 p.m. This is what my screen looks like when I'm liveblogging: 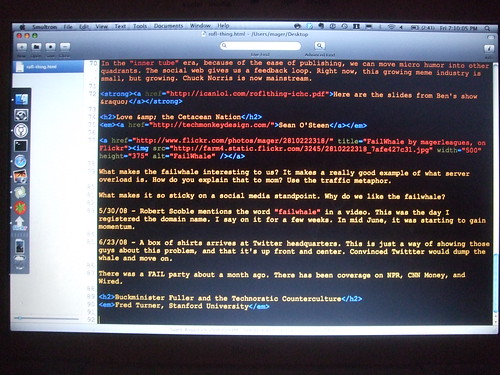 7:43 p.m. The bar is open. I will try to keep updating this with party photos if it doesn't get too crazy in here. The party is being held at Mighty. 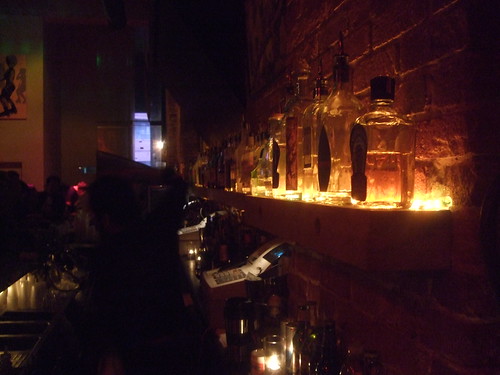 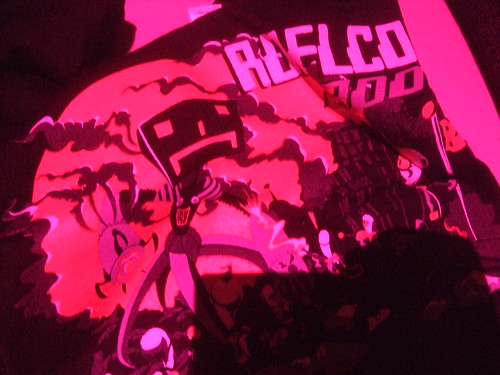 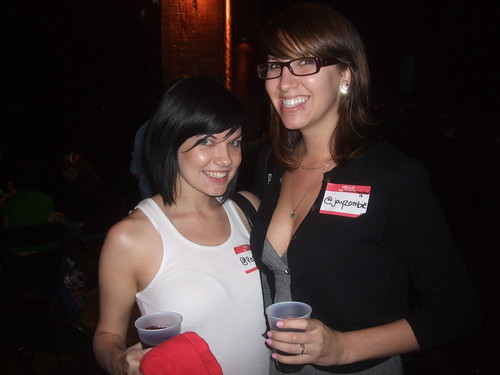 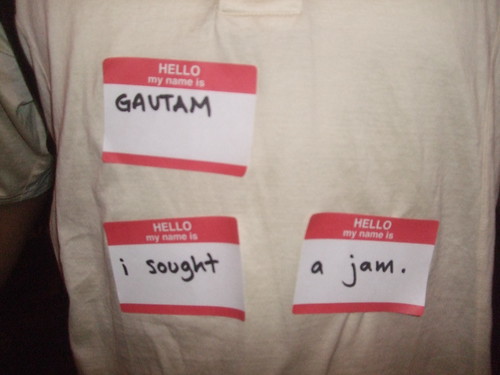 It's funny how people just go by their Twitter names nowadays: 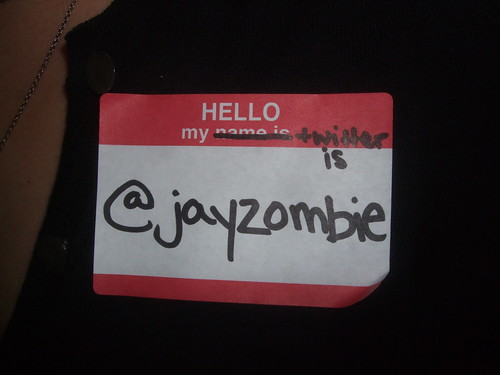 8:20 p.m. I got to meet the event's organizer, Tim Hwang. He is thinking about throwing a ROFLcon in SF :) 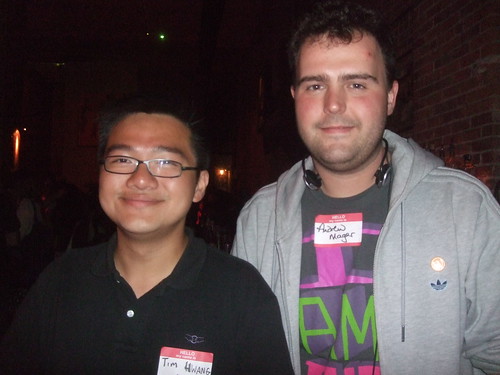 8:30 p.m. John McTaint was in attendance tonight, polishing his plans for the White House in 2008: 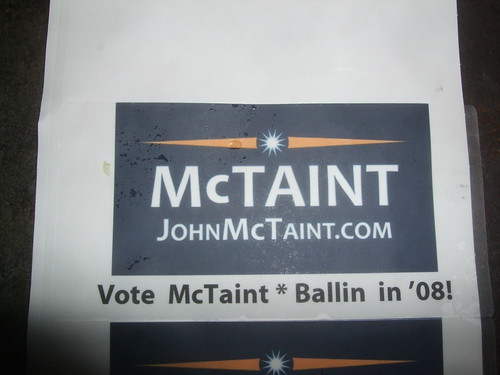 He told me that he was on his way to buying an 8th house. His jokes are totally satirical. 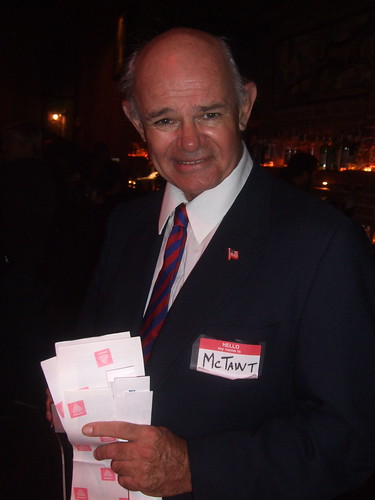 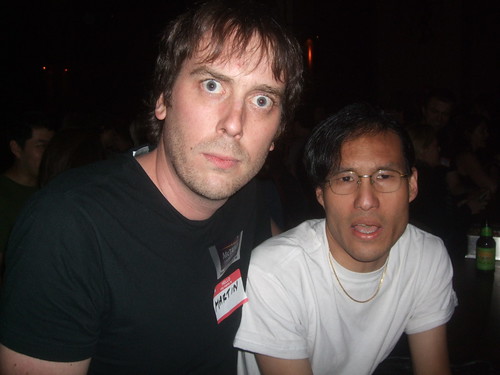 “He sold so many immortality rings, he now owns two houses in San Francisco.”

9:43 p.m. Dino Ignacio pictured at right is the creator of Bert Is Evil: 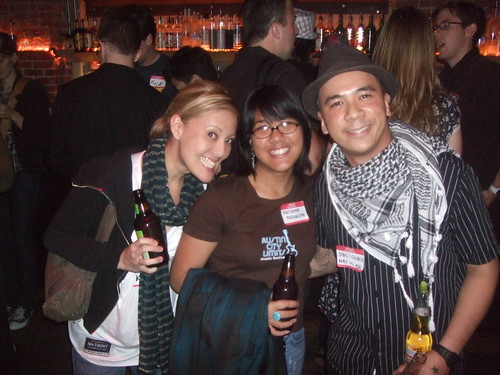 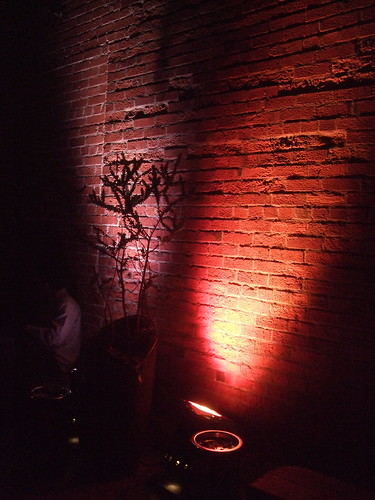