SAN FRANCISCO---Possibly two of the biggest personalities in enterprise tech appeared on the same stage together at Box Dev Day on Wednesday afternoon.

Salesforce.com CEO Marc Benioff stopped by for a fireside chat with Box CEO Aaron Levie, picking up the debate about the future of cloud computing discussed earlier in the day with Google executive chairman Eric Schmidt. 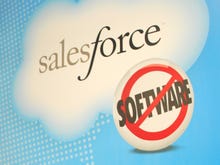 "Every company has a very high level of paranoia right now," observed Benioff in response to IT trends, further defining that to be a good thing.

There are three dimensions of every great company, according to Benioff: understanding next-generation tech, subscription-based systems with deferred revenue, and a philanthropic culture in the workplace.

"I honestly did not think these companies would be losing that much," Benioff said about companies relying on legacy enterprise IT infrastructures.

Benioff described a recent visit to a resistant corporation demonstrating just that. While he wouldn't name the potential customer, he did call out SAP repeatedly as a software business that has failed to innovate and deliver upon IT shifts in the last decade.

"I didn't think they would do as bad a job as they have done," Benioff said frankly about SAP. "Software is not a zero-sum game. These are huge mega-markets. Everyone can enjoy the abundance out there. If you don't do that, you can get wiped out."

Levie followed up by asking about one of Benioff's other favorite companies for discussion.

"It's always hard for me to talk about Oracle because Larry Ellison is a good friend of mine," Benioff said. "They're also a competitor, and they're also super sensitive."

Benioff had kinder words for Microsoft, with which Salesforce recently forged a new alliance, praising the tech stalwart for recognizing the shift to the cloud and its push for Microsoft Office 365.

"The market has mostly spoken that the world is moving to services. We're moving toward an ecosystem of services," Benioff explained.

Nevertheless, Benioff reiterated that "the best decision I ever made in the industry" was to build Salesforce.com from the ground up more than 15 years ago with a philanthropic foundation.

"When I was at Oracle, one of the things that really got me was that I felt I wanted to do more in the philanthropic world," Benioff recalled, admitting companies can do more, but it has to be part of the culture first.

Benioff also argued that as CEOs can also act as activists for change and defend their employees. The Salesforce co-founder elaborated on the move to pull Salesforce operations out of Indiana following controversy over a recently passed law argued to promote discrimination against the LGBT community.

"In San Francisco, we're pretty new age at some level," Benioff laughed. "But when you get to the rest of the world, it's not quite the same."

With the multi-billion dollar acquisition of ExactTarget -- now the backbone of Salesforce's Marketing Cloud -- Salesforce.com became the largest tech employer in Indiana.

Business leaders can care about the world in ways that not everyone would expect from a CEO, Levie remarked following a short video reel made by Salesforce about the Gay Rights Movement.

"This is a multi-stakeholder world we live in, with customers and employees," Benioff said. "We can't do business if the environment is not healthy."