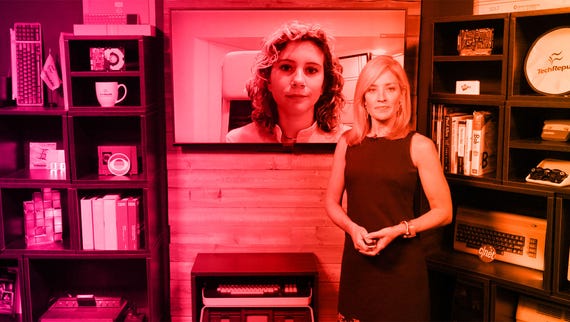 Samsung CEO DJ Koh kicked off the 2019 Samsung Developer Conference (SDC) by acknowledging the 50th anniversary of the Samsung company. He stated that companies are currently embracing AI, 5G, and IOT so these are the areas where Samsung is focused at this time.

In addition to the elements described in detail below, Samsung discussed its TV Plus offering, future foldable hardware form factors, and more.

One of the first major topics covered in the keynote was Samsung Bixby, its scalable AI platform. At SDC 2018 Samsung launched the Bixby Developer Studio, followed by Bixby Marketplace in June of 2019. Samsung revealed that the Bixby developer community has doubled in the past six months and Samsung is enhancing the Bixby Developer Studio with new Bixby Templates, updated Bixby Views, and Natural Language Categories in capsules.

The audience was able to watch Samsung developers use the new Bixby Templates to quickly and easily create basketball schedule capsules. It was pretty amazing to watch the creation and then the simulator testing be performed on stage within just a few minutes and gives me hope that we will see even more active development with Bixby.

Also: Samsung's S Pen is fantastic, but Bixby is another good reason to buy the Galaxy Note 9

Bixby gets a bad wrap on the internet, but as I've written before functions such as Bixby Routines are very powerful and if you have a Samsung device I highly encourage you to spend a bit more time with Bixby. I also sat in on a tech session for Bixby with representatives from 1800Flowers, Pinterest, and Volley describing how they are offering enhanced functions through Bixby. Even if you do not like Bixby, it is clear that Samsung is committed to making it a very capable assistant across all of its devices.

SmartThings is Samsung's Internet of Things backbone and continues to be developed with features such as SmartThings Vision, Air, and Energy to address privacy, health, and safety. Samsung reports that more than 45 million monthly active users and thousands of compatible devices are a part of SmartThings.

New capabilities announced for developers include a new Rules API and a SmartThings Device SDK Beta in early 2020.

Security is vital to the enterprise community and Samsung Knox is one of the best systems available today. The speaker for this portion discussed an extensive list of Knox features and capabilities, including the Knox SDK, attestation APIs, DualDAR encryption, trusted identification, Samsung Pass and an SDK for it, Blockchain support with the Samsung Blockchain Platform SDK. Security and privacy are important to Samsung with most of the highly secure elements being stored on the devices rather than syncing to a cloud service.

Also: Six days with the Samsung Galaxy Fold: Is it really as fragile as Samsung warns?

Last year we saw Samsung improve its smartphone interface with the new One UI and it is clear in every Galaxy review I've read since it rolled out that people appreciate the minimalist approach. At SDC 2019 Samsung introduced One UI 2 through a quick video and description of some features.

With One UI 2, we will see a focus on minimizing interruptions, enhancing reachable areas, and improving on natural interactions. The dark mode is extended to the lock and home screen to make the phone visibly comfortable. More colorful icons and some with animations are present in One UI 2 as well.

One example of minimizing interruptions was shown for an incoming call while watching a movie. Currently, we see several lines appear on top of the display and the One UI 2 interface looks to have simply a caller ID name and then accept/reject buttons below it. Many of the improvements are subtle, but offer improvements overall that are sure to be appreciated.