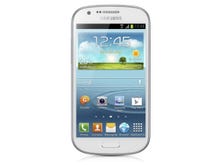 Samsung has sold over 25 million devices running Knox since October 2013, with more than one million active users on the BYOD-minded platform.

The device's design remains vastly in line with its other Galaxy Tab counterparts, except for a thinner and lighter shell. But it packs a powerful punch with new features, technologies, and some enterprise goodies.

It's the Korean electronic giant's latest bid to take on Apple, its arch-rival Apple in the mobile space, with its flagship annual tablet.

Which, naturally, any mention of design from Samsung might raise an eyebrow or two for anyone at Apple, considering its legal design-focused dingdong between the two global giants two years ago.

Samsung executive DJ Lee said the company has "made a commitment to tablets, because we strongly believe in its market potential," citing as many as 290 million tablet units shipping this year, according to Strategy Analytics, and the massive growth the company's own market share.

He added Samsung now has 22.6 percent of the tablet market share with its Galaxy Tab range of devices.

At the heart of the new tablet, which lands in two sizes — 8.4-inches and 10.5-inches — is a fingerprint reader, following its debut  in its smartphone sibling , the Galaxy S5, embedded into the home button.

As you might expect, for the business user and the wider enterprise, the embedded hardware security technology, combined with the company's own Knox mobile device management software, is likely to pique the interest of corporate chief information officers and below.

The dual-core Exynos S Octa processor-based tablet itself is about 6 milimeters thick — about five credit cards. The smaller model of the two weighs just 10 ounces, while the larger model weighs about one pound, according to Samsung.

Compared to the smaller iPad mini with Retina display and the regular-sized iPad Air respectively, Samsung is pushing its new tablet's specifications — and likely Apple's own accomplishments — to the limit.

Throw these features together, and Samsung is clearly taking on Apple's already burgeoned enterprise customer base, which at the last count the iPad maker had almost every company on the Fortune 500 in its portfolio.

As for the tablet's other flagship features, the dazzlingly bright Super-AMOLED display sports a resolution of 2560 x 1600, or twice the high-definition standard.

The tablet lands with 16GB in-built storage, with a micro-SD slot for expandable storage of up to 128GB.

And the battery will last for 11-hours worth of video, making this tablet a strong contender for any seasoned business traveler, and business and enterprise user.

Samsung's tablet will be available from July, executives said.