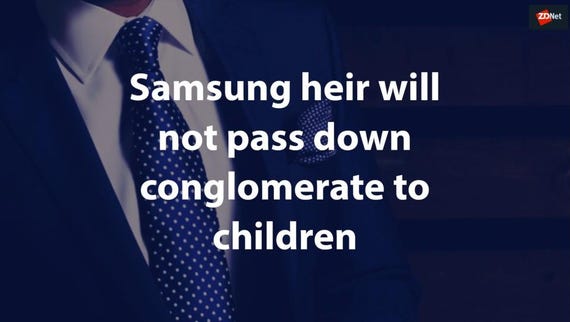 Samsung heir will not pass down conglomerate to children
Watch Now

Samsung's de facto leader has issued a televised apology for the conglomerate's involvement in a national corruption scandal, admitting that the charges of unethical activities were caused by a "succession problem" and promised such activities have been put to rest.

Lee Jae-yong, who also goes by JY Lee, also said he would not pass over the conglomerate to his children.

"Today, I promise we will no longer take ethically questionable shortcuts or cause controversy from the succession. I will solely focus on increasing the value of the company," he added.

In a surprise comment, Lee also said: "I will not be passing over management rights to my children. I have thought about this for a long time, but I didn't want to say anything as I thought it was irresponsible to comment on succession during these difficult times and even before I have been properly evaluated [as a leader]."

The 52-year old Lee is the third-generation leader of Samsung -- a family-run business group, known as chaebol in South Korea. His grandfather, Lee Byung-chull, founded Samsung in 1938, and his father, Lee Kun-hee, succeeded his grandfather in 1987.

Lee Kun-hee suffered a heart attack in 2014 and was hospitalised, and has not been seen in public since. Due to this , JY Lee has been effectively running the entire business group, acting as the company's de facto chairman for all intents and purposes except in name. His current official position is Samsung Electronics' vice chairman.

It is extremely rare -- if it's not the first time -- for a Korean chaebol leader to publicly state that they will not pass their business group to their children.

JY Lee is known to have a daughter and a son, who are both minors.

His televised apology comes amid his ongoing corruption retrial. Prosecutors have argued that Lee and senior Samsung executives bribed a close aide to former South Korean President Park Guen-hye to gain government support for a controversial merger of two Samsung affiliates that would have increased Lee's control over the business group.

Following this revelation, Lee was arrested in 2017 and eventually jailed later that year. An appeals court then suspended his sentence and released him from jail in 2018, but the Supreme Court in 2019 ordered a retrial that is currently being undertaken in the appellate courts.

Lee and Samsung have already admitted to the bribery charges and are only fighting against sentencing terms in the retrial. At the same time, Samsung formed an independent compliance committee earlier this year, following advice given by the appellate court judge.

Since its inception, the committee has demanded that Lee apologise and promise to no longer cause controversy over his succession.

Join Discussion for: Samsung heir will not pass down conglomerate...